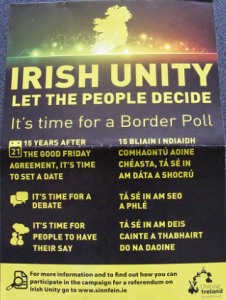 I was talking to two friends the other day, one a nationalist, the other a republican. The subject of a border poll came up and both agreed that it would make no sense, since there is no way it would be won by those who favour a reunited Ireland. In that they’re in agreement with the Taoiseach Enda Kenny, who has declared that “I’ve been very consistent in my view that the conditions for a referendum do not currently exist.”

There are a number of responses could be made to that statement, the most obvious being “How do you know?” To refer to polls is akin to pinning a tail on the donkey in the dark – you might hit the spot and you might not. Besides, it doesn’t matter what Enda or any of us thinks, it’s the British Secretary of State who gets to decide if there’ll be a referendum When he figures there’s a good chance it’ll be won by the reunite Irelanders, he’ll declare we can make our mark.

Enda, of course, is making this firm statement about no border poll because, if we’re to believe the PR, almost single –handedly, he’s persuaded EU leaders to make Ireland a priority in their talks with the British. In fact what the EU has declared is that, in the event of Ireland reuniting, the new state will immediately become an EU member. That’s actually a simple restatement of fact – it’s what happened when Germany became reunited. The new state became automatically a member of the EU.

But I suppose there’s no harm in stressing what is a fact. Having covered the “I believe in a reunited Ireland” angle, Enda goes into St Augustine mode and prays “Lord, let me have a a reunited country – but not yet.”

What would have been a victory for Enda would have been if he had persuaded the EU leaders to declare Ireland north and south a special case, given its border between an EU state and a soon-to-be non-EU state. He didn’t do that. In fact he didn’t even try.

I believe the same would obtain in Ireland. A border poll on independence might be won and it might not be won. But what it would give for sure is clarity. All parties would know what the actual state of affairs was, rather than relying on daft information such as how many people described themselves as ‘Northern Irish’ in the census and then deciding that meant they wanted to remain in the UK. Maybe they do, maybe they don’t.

That would give us the truth of our situation. And who’s afraid of the truth?

23 Responses to A border poll: time to stop playing Pin the Tail on the Donkey