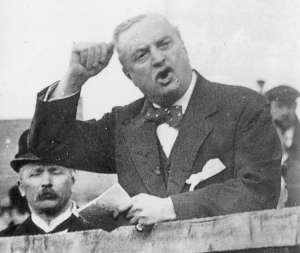 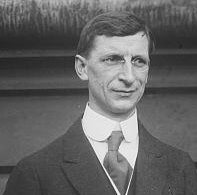 The once great British Liberal Party last won a General Election on its own in 1906 and when it last formed a Government of its own was dependent on the support of Irish Nationalists following the 1910 election. It, or a section of it, which had gone into coalition with the Conservatives during the Great  War, fought the next election in 1918  as part of that Coalition,  won power with it. That Coalition split in 1922, after which the Liberals departed the World and Imperial stages, the stage of Great British politics and retired into the parochial parish pump politics in non-conformist pockets of  Western Britain.

The Irish Parliamentary Party, led by John Redmond, held the lion’s share of Irish seats from 1910 (many of them  won without a contest). The General Election of December 1918 left them with a mere 6 seats. Five of these were in Ulster, including West Belfast, where Joe Devlin beat off a challenge from Sinn Fein’s Eamon de Valera. The remaining four were held by arrangement with Sinn Fein. Far South in Waterford John Redmond’s son beat off the Sinn Fein challenge after the Unionist Irish Times, for the only   time in its history, endorsed a nationalist candidate. Sinn Fein, with most of its candidates and many of its key workers in British prisons, and its manifesto offering the Irish people a sovereign and separate Irish Republic, won 73 of the country’s 105 Parliamentary seats.The TIMES of London reported that the election had been treated on all sides as a plebiscites.

The Nationalists, who never wielded political power, never regained any influence in Westminster nor in Ireland.

The 1916 Rising was a political success which still resounds in Ireland. The British Government and John Redmond, by their blundering, helped that success. But the Insurgents, by their conduct, won the respect, love and considered agreement of the mass of the Irish people almost from the start. To be related to an executed Insurgent,to have been sentenced to death as an Insurgent, interned as a suspected Insurgent was the best possible recommendation of an election candidate. Before such individuals came together under the umbrella of the  a reorganised Sinn Fein they had,between January 1917 and September 1917 won 5 Parliamentary  By-Elections. In June 1917 the Rural District in Ennis, Co. Clare called on John Redmond and his Party to resign their seats “as they no longer represent the views of the Irish people.” A few days later their MP, Major Willie Redmond (brother of John) was killed in France. And shortly after that Eamon de Valera, an Insurgent sentenced to death in 1916, was released from prison where he had been serving a life sentence. He was unknown in the Constituency, but was selected as a candidate and elected with a resounding majority. He was re-selected  and re-elected for the constituency  in every election for the next forty years.

Every Government which has sat in Dublin since the 1916 Rising has been led by a 1916 Insurgent, or by a party founded by a 1916 Insurgent. Parties which have been junior partners in coalitions were not unconnected with the Rising. The Labour Party was founded by the executed Connolly and Clann na Poblachta by Sean MacBride, whose father was executed.

The 1916 Rising was a popular, democratic political success. It thus fulfilled one of the three purposes of war – the winning of political support.

In the Spring of 1916 the United States was still neutral and it was not to come into the Great War and pull Britain’s chestnuts out of the fire. The latter’s Imperial forces had got a drubbing at Gallipoli and neither they nor the French had driven the Germans nor the Austrians from a square metre of territory. Britain’s Volunteer Expeditionary Force of 1914 had proved inadequate for its allotted task and the introduction of Conscription was being planned. The US President and the Pope were urging peace and the Germans who had launched the Battle of Verdun were apparently ready to consider it from a position of strength. The Irish Republican Brotherhood who planned the Rising intended  that when a Peace Conference was called that, as a belligerent nation, Ireland would have a seat at the table.

WHEN, IN 1919 THE PEACE CONFERENCE MET AT VERSAILLES A DELEGATION FROM THE NEWLY ESTABLISHED DEMOCRATIC PARLIAMENT – DAIL EIREANN SOUGHT THAT SEAT, THE VICTORS WOULD HAVE NONE OF IT.

This was noted in Egypt and India, Korea, Indochina, and nations struggling to be free, and by Irish and other democrats throughout the world. When Britain no longer had the wherewithal to hold India, that nation gave a hero’s welcome to the Parliamentary Member for East Clare, who was temporarily out of Government office.  Winston Churchill, then also out of office, thought better of visiting India, where he would most probably have been torn limb from limb.

The plans for the 1916 Rising were on a grander scale than the actual events. But they were not hare-brained. The total fatality count was less than that of the Titanic. The commanders did not scramble for lifeboats, but the claim that it was intended as a blood-sacrifice is spurious and derives from quotations made out of context. The speeches of John Redmond and his actions caused far more bloodshed even before the Rising than the actions of Republicans from his day to ours.

(Much of this opinion piece arises from a reading of  TOWARDS A REPUBLIC by Liam Neeson, published 1998.)