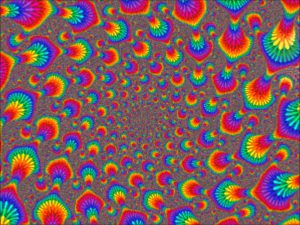 So what good was a principle if she couldn’t get that great job back, she thought.They barely allowed her to speak about anything these days, but this idea that Nigel cobbled together just might do the trick and get those old wheels rolling again.It was worth a punt .This Irish language out-reach scam might just be the very thing to steal the Shinners’ thunder and bounce her and the DUP back in the game. Sure….what was language anyway, she pondered….only a collection of sounds….it ‘ll only take an hour or two anyway and there wasn’t much else to do but consider another line of work…..
It hadn’t been too bad really. All these nice ladies were very unthreatening and they were all wreathed in happy-clappy smiles, doing their level best to be at their most pleasant and pleasing.They’d put some effort into making her feel right at home.

Later, as the television cameras rolled, her mood was euphoric …almost transcendant .Arlene’s eyes were shining radiantly. She felt somehow elated.It was as though a great weight had been lifted from her shoulders ,in that newly- minted instant and the world seemed more in tune somehow .The tension of the past three months was beginning to dissipate. All that talk of republican “crocodiles” was gone …purged from her mind. She felt born -again and enervated.Those celestial spheres ,they talked about, were humming in unison.What was it that that old Greek, Pythagoras and his followers thought that celestial bodies ….the sun moon and the planets all made music together. Everything seemed brighter than before like the first summer of childhood; the colours were shimmering and vibrating all around her .Could that grass be even greener than it ever was before she entered the building ? How could that … impossible blueness of the sky be any more ……..blue……. .aquamarine …azure…cobalt…agate..brandeis…indigo…majorelle…periwinkle…palatinate phthalo….denim teal…turquoise….all the words spun through here mind like coloured playing-cards being deftly flipped into a magician’s top hat.It was truly bluer than blue, as though the sky had been freshly painted, just then at that precise moment in time…… ,by Van Gogh..what was “time” anyway? she wondered…and that sun was shining brighter and more radiantly and intensely than it ever did before .Look at those highlights and deep green and ochre shadows beneath that tree ,she murmured as thought tumbled after thought….those flecks of celeste and navy she had been so unaware of before .The insects were buzzing loudly , each singing an individual tune as their wings hummed and they sipped nectar from the pools of sweetness in the open blossoms.The blossoms!…Look at those blossoms! Why had she never noticed their complicated beauty before ; the way their puzzles of petals interleaved and the dusting of pollen on the anthers and stamen at their hearts’ cores.
She wanted to shout out loud and burst into song .”Oh what beautiful morning…oh what a beautiful day, I’ve got a beautiful feeling , something is coming my way”….. like whassisname …yes , Gordon McCrea in “Oklahoma”.Her heart was already nearly bursting with pleasure and she was only halfway down the cup’s contents.
Those happy -clappy smiling faces had spiked her tea with primo LSD as good as Stanley Owsley’s legendary best”White Lightning” .As the acid took its slowly gradual effect and the trip began ,she thought she might grow her hair down to her arse and watch the waterfalls of colour flow down each follicle with dancing rainbows , sweeping to a sea of infinity, or maybe she’d get a coloured green and red black-outlined tattoo of a snake from her ankle to her thigh.She thought she might want to watch it crawl around and around her leg ,in the sunshine, as the light changed.
That cup of tea!….yes that cup of glorious slightly hot liquid; she’d taken “a wee warmer” to top it up , with much thoughtful pleasure. She simply could not stop smiling to the point where the muscles in her face ached with the sheer pleasure of it; she felt like laughing out loud. She’d never in her life before appreciated the subtle aromatic notes of each exploding atom of the constituent parts of that few ounces of liquid ambrosia in her hand..when did tea ever taste like this ..? she’d have to remember to ask what brand it was. was that a hint of Orange Pekoe?She could imagine the women picking each leaf by hand in order not to bruise the leaf and corrupt the flavour.That biscuit she was nibbling was taking long…long….minutes to chew , every second as she masticated , as long as twenty minutes each bite ,it seemed; her jaws slowly munching while releasing the sweet sugary, salty mysteries of butter, flour and cinnamon….each new atomic explosion on her tastebuds and tongue to be studied and hovered over.the slifght metallic tastes at the back of her throat …..Her hand ! ….That hand!!…Well it looked as interesting as the graduations of a serene Arabian landscape. The skin , creases ,freckles and fine hairs of her hands glowing as the sunshine through the window picked out the little diamonds of light that haloed each one.Why had she never noticed any of this before? , she asked herself.
What was that sound? Music ….another language of colours snaking amd swirling as though squeezed from a toothpaste tube to elegantly move in unison with every breath she inhaled and exhaled, her heartbeat keepingits own time.She felt she could taste and feel the texture of each succeeding note.She knew a that moment that she could almost open her mouth and speak in tongues and she felt so much a part of the sounds surrounding her , entering her ears like coils of coloured linguini creeping towards the centre of her brain, the room full of happy ,smiling people, joined together in those same rhythmic coils ,the universe of atoms within the chair she was sitting on softening to allow her in and gradually becoming so much a part of it , that she could imagine at last what it felt like to be ” at one with the very universe”….a tiny , very important part of all that vibrating stardust around herself and all the vibrating others in the room, that had already opened to the cinerama of the skies above as the roof seemed to dissappear from the building.
As she left she said ,
Go raibh maith agat……….slan.

“I’d love to teach the world to sing in perfect harmony” , she hummed as she skipped across the gravel on invisible wings, breathing deeply on the Springtime air she opened the shining door of her car and looked again at the sparkling diamonds flickering across the windscreen.Why had she never noticed that shimmering rainbow of colour surrounding it before ?Why had she never seen the world like this before, either ,she wondered …..and where she could get some of that wonderful tea for Jim Allister, she cogitated before the first real rush of bliss exploded in her brain. She could not stop smiling and her cheek- muscles hurt so much that she had to pinch them.

10 Responses to THAT FIRST CUP OF TEA IN THE UNIVERSE