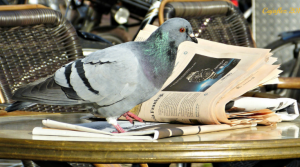 Harry Evans, as was, now Sir Harold Evans, wrote a 500 page book, published in 1983 following his departure from the Editor’s Chair of THE TIMES of London whereupon he had sat for approximately a year in 1981-1982.

I have been a regular reader of the paper since the early 1970s. I never set eyes on it before I came to London in 1964 but I knew of its reputation, editorially exulting on the depopulation of Ireland after the Great Starvation and the evictions – ” The Celt. shall be    rare on the Banks of the Shannon as the Red Indian on those of the Dalaware”, its hiring of the forger Richard PIggott to frame Parnell amongst a host of  that paper’s crimes.

In The early 1970s the then young ( weren’t we all ?) Robert Fisk was sent to Ireland by THE TIMES. He had no agenda other than finding out what was happening its historic context and the viewpoints of those involved. Compared with other British correspondents he was a giant. He neither demonised nor canonised any of the actors. The opinion columns of THE TIMES regularly carried poisonous pieces by, for instance, Lord Chalfont, a Labour Peer who had served as a Colonel, bashing the ” Lesser Breeds” in various parts of the Empire, the paper’s editorials were always Right of Centre, but Fisk’s reports, from Ireland and later theatres of conflict were always worth reading. There are still some columnists with the paper whom I wouldn’t punch on the nose, including a couple of Tories, the ex-MP Matthew  Parris and (Lord) Daniel Finkelstein, though I often disagree with them.

But the general tenor of the paper is bad. Distasteful. When the idea of running John Hume for the Presidency of Ireland was mooted it thundered in an editorial that as Hume was from Londonderry and (presumably) Her Britannic Majesty’s subject, that would be lese-majeste, an affront to the Sovereign.  Sir William Rees-Mogg, Evans’s predecessor as Editor of THE TIMES, was one of a group of ill-wishers who met with the Papal Nuncio to Britain to pursuade him to advise the Pope not to appoint Archbishop Tomas O Fiaich to the College of Cardinals. Others of the ill-wishers included Roy Mason and Dr Conor Cruise O’Brien.

Small-mindedness is endemic in the paper’s dealing with Ireland.One of its correspondents mocked Martin McGuinness for rendering “film” as “Fillum” . In Hiberno-English and Caledonian English great numbers of people treat farm, film, girl, for instance, as disyllabic nouns. It arises from the fact that their ancestors spoke Irish or Scots Gaelic and some teachers of English were taught to read the latter language without being taught by native speakers of it. The word for “Blue” in Irish is “Gorm” pronounced “GURRUM” .   English squaddies may sit on benches, known and pronounced as ” FORMS.”. The Irish Defence Forces, Officers, NCOs and Men, all Arms and Arses sat on FURRUMS.  The TIMES has no cause to sneer.Barely a day goes by when it’s not marooned, or even dangled, on the Iberian, Korean or Dingle “PENINSULAR”.

But when Harold Evans was in the Editor’s chair it was a nest of dirty rotten scoundrels. Its chief correspondent in Ireland, Christopher Thomas, made no attempt to conceal his hatred and contempt for Ireland and her people. Nor did he make any attempt at honest reporting. He later reported from India, whose people he treated as he did the Irish, and  his reports were equally false.  To put it mildly – Christopher Thomas said more than his prayers.

The Hunger Strikes of 1981 when ten republican prisoners died on hunger strike and three were elected in Parliamentary elections merit not a mention in Harold Evans’s “GOOD TIMES, BAD TIMES”, though they were news throughout the world during his short tenure at the paper.

But the funeral of Bobby Sands MP featured on Page One   on May 8. 1981. “The Roman Catholics buried Robert Sands yesterday as Protestants lamented their 2,000 dead from 12 years of terrorism.” Christopher Thomas went on to refer to “the 2,000 victims of Sands’s collaborators.”

Margaret Thatcher, Ian Paisley and Jim Kilfedder MP were amongst the public figures peddling the lie that all the 2,100 victims killed since 1969 had been killed by republicans.  In fact the British Army, the Royal Ulster Constabulary and the British-tolerated Ulster Defence Association had killed at least 800 persons, a great number of them Catholics.

I wrote a polite letter to the Editor of THE TIMES asking  him to correct the story. I got a reply from John Grant, Managing Editor, claiming that their correspondent had checked his figures from many sources. Another reader, living in Paris, also wrote to the paper and got a similar brush-off. I then complained to THE PRESS COUNCIL, as did the reader in Paris. The PRESS COUNCIL did its damnedest to avoid condemning THE TIMES, although I had the evidence, collected by Fathers Denis Faul and Raymond Murray and passed to me by Brendan MacLua of THE IRISH POST, months before my complaint was upheld in February 1982.  John Grant of THE TIMES was an alumnus of Balliol College, Oxford, an ex-Officer of the Brigade of Guards and used set THE TIMES CROSSWORDS. An impressive CV, but I can’t help thinking of Squire Weston in Fielding’s “Tom  Jones” to the nobleman trying to rape his daughter Sophie: “For all your fancy folderols, you’re the son of a whore.” Grant has moved on to where cross words must be the least of his worries.

While the Press Council was still ruminating in December 1981 THE TIMES published photographs of everyone killed during that year and labelled them as victims of terrorism. Amongst those shown were children deliberately killed by the Crown Forces. The dIrty rotten scoundrels of THE TIMES still implied that they were victims of the IRA.