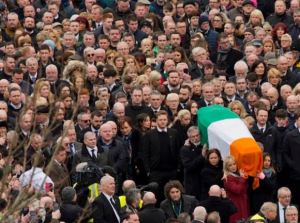 Picture by Derry Journal
Anyone who watches the footage of the late Martin McGuinness’ funeral cannot but feel moved in some way, not just at a great life cut short, but the reaction he generated in death. The doors and Church grounds were packed with Presidents, Taoisigh, Parliamentarians of all parties, senior Orangemen, First Ministers, Unionist Ministers, Republicans and ordinary working class people – both young and old. The mood was a touching tribute to a patriot steeped in the Irish conscience.

But the most striking thing about it all was that for the first time since partition, the Irish people as a whole were reunited, albeit in grief. There was no bickering or religious and political divide, we came together as one community, one society and one nation, under God. Catholic, Protestant and Dissenter. All the differences of the past were set aside in the national interest, with the flag flying at half mast in condolence. It was broadcast on every news channel around the world and sparked a global response of sheer awe. Old enemies were now displaying friendship before the eyes of the nation at large, bringing a tear to even the most hardened of eyes. A man laid bare who in his youth, and with boyhood’s fire, read of Ancient Freemen; of Greece and of Rome, in the spirit of Tone.

There are of course the ‘intrigues’ out there, like Mr Eamonn McCann and others, who vent their bitter frame of mind towards the deceased in their petty scribblings in Establishment tabloids; blissfully unaware that if such a tragedy had happened to them, they would receive no such grand gestures across this island and the world. Martin McGuiness was a better and more courageous man than you’ll ever be, Mr McCann. And unlike most, he had the patience to tolerate lesser quality people such as yourself. Unlike you, he had the nerve to act where you had the reservation of sheer rhetoric in a climate of injustice. Someone who’s preoccupation is arguing it out with fellow Marxists over who is somehow more “left-wing” is not a man who can be relied upon to lead a nation. Martin’s legacy lives on while your political career is finished; and not short enough it was.

But the point I’m getting at is this – Whatever the ‘obscurantists’ say, what we witnessed was a preview of what a real green, white and orange nation reconciled would be like; that all the misfortunes of the past would be set aside when both traditions rise above the artificial differences that have been fostered by an alien government. That we, as a small sovereign, have the capacity to punch well above our weight globally and demonstrate to the planet a Platonic conception of a real Republic at peace with itself. That’s a lasting and powerful thought. So don’t think of McGuinness in terms of frail images and how he died; emulate in your own work how he lived.

View all posts by Jude Collins →
How important is it that Gavin and Mark’s bums press the Commons benches?
GOOD TIMES, BAD TIMES – AND DIRTY ROTTEN SCOUNDREL TIMES! by Donal Kennedy

27 Responses to ‘Martin McGuinness’s Funeral: A Solemn Epitaph of Unity’ by Donal Lavery