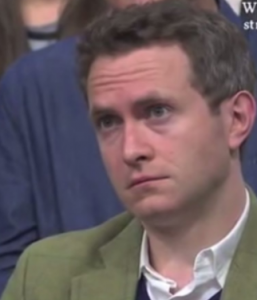 I stole the title of this piece from Damon Runyon. He doesn’t need it anymore.

A very good friend of mine, an Englishman, once told me that the Daily Telegraph is the House Journal of British Intelligence. He has a droll sense of humour, my very good friend. But he did it with a straight face..

I remembered, during the Anglo-Argentine war in 1982, reading in that paper an account of Gurkha troops, going into battle showing “Anglo-Saxon” valour It was by their Military Correspondent, a general, no less.

Words, except for short Anglo-Saxon ones, failed me.

I remembered, too, a regular Daily Telegraph columnist’s comment on the influence of television coverage on the outcome of the American war in Vietnam and its environs. American civilians at home sickened of it and withdrew their approval. The paper’s pundit claimed that the North Vietnamese did not show such TV footage.. His inference, shared presumably by most of the paper’s readers, was that the poor benighted native blighters were thus oblivious of the American bombs landing on and around them, in tonnage outweighing those used in the Second World War.

Deprived of the privilege of watching American TV the natives didn’t demand their own withdrawal from their own country. Truly might The Daily Telegraph be sub-titled IQ TWO ZERO.

But that was then and this is now, and I hear that the Daily Telegraph’s Intelligence Quotient has taken a quantum leap with its acquisition of one Douglas Murray. I first became aware of Mr Murray when I saw him feature as a panellist on BBC’s “Question Time.” He bestowed contempt and condescension liberally, indeed promiscuously, on panellists, chairman, studio audience and home viewers alike. He suffers neither fools nor sages gladly. His sneer must eclipse that of Ozymandias, of whom Keats wrote. Sculpted in stone his pedestal would beg the legend – “Look on my works, ye Gobshites! and despair.”

So I googled Douglas Murray, and found him all over the Internet, like the proverbial cheap suit. You can find him in print and on YouTube. Expensively schooled at Eton College, he boasts, and it is the right word, a (lower) Second Class Honours Degree from Oxford University where he read English.

He is the author of a biography of Lord Alfred Douglas (“Bosie”) the worthless, reactionary lover of Oscar Wilde. He also wrote “Why We Still Need Neoconservatives”. He has a burgeoning fan club in America. I think it is called The Mad Hatters’ Tea Party. Pedants take note that I have placed the apostrophe correctly, for there are many mad hatters in it.

Mr Murray has also written a play about Raoul Gustav Wallenberg, a Swedish diplomat who saved thousands of Jews during the Second World War. Mr Murray broke no new ground here. For there are statues of Wallenberg in London, Buenos Aires, Los Angeles and Tel Aviv, and a monument in Sydney. The United States, Canada and Hungary conferred posthumous honorary citizenship on him, as did Israel. Ireland didn’t, and apparently missed out on having his passport stamped in Dubai.

The memory of Raoul Wallenberg certainly deserves to be honoured by all men and women of goodwill. As does that of Count Folke Bernadotte, also Swedish, also a diplomat, who also saved scores of thousands from murder by the Nazis during the Second World War.

At least 400 of those thousands were Jews of Danish nationality. Count Bernadotte was a descendant of Jean Baptiste Jules Bernadotte, a Marshal of France under Napoleon, and Desiree Clary from an Hiberno-French silk merchant family in Marseilles. Jean Baptiste became King of Sweden, by invitation, not conquest, and the country’s Royal Family is of his line. Count Bernadotte’s 1948 funeral was attended by the first Secretary General of the United Nations, Trygve Lie, by British Foreign Secretary Ernest Bevin and United States Secretary of State George Marshall, but he seems not to have a single statue in his honour, nor a deck of honorary passports, nor a film by Steven Spielberg. And I wouldn’t hold my breath waiting for Douglas Murray to write a play about the Count to complement his first.

Mr. Murray’s CV describes him as Director of an outfit styling itself The Centre For Social Cohesion. It also features an interview he gave to something called Standpoint under the modest heading “My Cultural Life.”

Mr Murray is a protégé of Michael Gove MP of the Conservative Party’s General Staff. Those familiar with Mr Gove’s pronouncements on Ireland may think him more a Private Pike, the “Stupid Boy” of “Dad’s Army”.

Douglas Murray is aged 30 and was born since Mrs Thatcher formed her first government and not long before the publication of the first Adrian Mole novel. But Toad of Toad Hall seems a more convincing template.

But, you’ll be aking – What is the the Irish relevance of all this?

I might reply that Desiree Clary was probably connected with the founders of Clery’s department store in Dublin. But more, much more than that, is the Daily Telegraph’s collecting, at the instigation of Douglas Murray, “ Irish Jokes.”

View all posts by Jude Collins →
‘The mother of all bombs’ – Take that, world!
‘How Do You Solve A Problem Like Regina?’ by Catherine Kelly

2 Responses to SENSE OF HUMOUR by Donal Kennedy