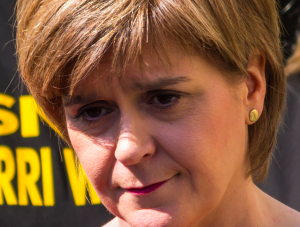 I am by no means a fan of the Scottish National Party. They have a very circumspect record in relation to anti-Catholic bigotry in Scotland, particularly during the era of Billy Wolfe. Basically, I don’t trust them and many of their supporters are the most vocal advocates for ridding Scotland of Catholic education. I also can’t forgive them for having voted to bring down the Callaghan government and usher in Margaret Thatcher in 1979 – something the Scottish people never forgot, as she laid waste to their industrial communities and squandered the oil revenues. Likewise, they have always left it to the Westminster government to face down and regulate Loyalist extremism in the form of legislation applying to Scottish league football. If you read the history of Scottish nationalism, it is very hard to isolate it from the anti-Irish and anti-Catholic fanaticism which has plagued that country for centuries – which is why I have always found it frustrating when Irish people so fervently express support for them. Do not confuse nor insult the anti-colonial struggle of the Irish people with the neo-nationalist agenda perpetuated by Scots Nats.

During the lead up to the referendum campaign for Scottish independence, a former SNP MSP and noted left-winger, Margo MacDonald (wife of former SNP MP Jim Sillars) expressed serious concerns that the UK Security Services would undermine and sabotage the debate. MacDonald even went so far as to write to the head of MI5 seeking assurances that the force would not interfere in the question of sovereignty on the basis that they were “defending the realm” in the “national interest.”

While I have little respect for the Monarchist Alex Salmond (a key friend of Rupert Murdoch) or his successor, with their cavalier use of facts and figures; I do however have a lasting respect for the late Margo MacDonald and her husband Mr Sillars, as two people committed to a fair and just society across the Irish Sea – Mr Sillars has always been a supporter of justice for Ireland also. One of the most revealing things which MacDonald stated to the media before she died was that MI5 were using operatives within the SNP itself, having had agents infiltrate and control it at all levels – which really raises the question of what sort of Scotland would emerge under their command should the population opt for “independence” at some point.

These may be startling and unpopular sentiments to highlight to an Irish or republican readership, which wishes to see the breakup of the British state that has tyrannised them, but any thinking person cannot ignore the fact that an independent Scotland would certainly not be a beacon of left-wing methodology. Margo was always of the view that the CIA and MI5 were influencing the nationalists, particularly in their economic ideas. While I don’t care much for Ms Sturgeon or her colleagues, these revelations from a leading member of the ‘Yes’ campaign should afford all of us a note of suspicion towards Scottish nationalism and what exactly these people in Edinburgh would actually do with their hands on all the levers of power. Caution in politics is a quality and not a hindrance; so be careful what you wish for and who exactly you build alliances with.