This time 20 years ago the fledgling Irish peace process was in deep trouble and on the verge of complete collapse.

The failure of the then Tory government to embrace the opportunities created by the IRA ceasefire and to commence meaningful negotiations brought about the collapse of the ceasefire.

Only when new governments were elected in London and Dublin, combined with the significant political influence of President Bill Clinton’s US administration did the IRA go back on ceasefire.  Quickly thereafter inclusive negotiations began which led to the Good Friday Agreement (GFA) in April 1998, and the formation of the local power-sharing government and all-Ireland institutions.

Today and twenty years later the political process, which became the architecture of the peace process is now in serious trouble and a deepening crisis.  It is not coincidental that a Tory government is back in power.

The collapse of the power-sharing executive and failure of the talks since the Assembly election on 2nd March constitute the most serious political crisis in the peace process since before the GFA was signed.

The origins of this crisis go back to the election of the Tory-led coalition 2010.

Since it returned to power this Tory government has adopted an explicitly pro-unionist and partisan policy towards the North.  It has politically aligned itself with both the DUP and UUP in joint support for austerity policies; Brexit; a single unionist narrative of the political conflict; and in blocking any progress on dealing with the past, as well as core equality issues.

When the Tory party came into government in 2010 those on the extremes of political unionism seized the opportunity to push back against the progress of the peace process, by attempting to systematically hollow out the GFA.

That backlash has defined the direction of the political process in the North over the last seven years.

A significant and influential section of the DUP have always opposed the GFA.

That has found expression in their opposition to sharing power with Sinn Féin, and hostility to equality for republicans, the Irish identity, ethnic minorities, women, and the LGB&T community.

These are the people who forced Ian Paisley out of the DUP leadership after he led that party into coalition with Sinn Féin in 2007.

They haven’t gone away.  Their regressive mind-set still dominates within the DUP.  It is most sharply pronounced within the party’s Westminster parliamentary group.

Since the onset of the RHI scandal tipping point last year and in particular from Martin McGuinness’ resignation and the 2ndMarch Assembly election, the DUP ‘Westminster Command’ has been in control of the party’s political agenda.

It became clear very quickly when the first phase of post-election talks began that the DUP was not serious about resolving this political crisis.  Importantly, but not surprisingly their position was matched by the British government.

Ultimately the scale of the crisis is the culmination of both the British and Irish governments taking the peace process for granted, (albeit for different reasons), since 2010 and 2011 when each respectively came to power.  Since then both have been continuously in default of their co-equal responsibilities to ensure full implementation of the GFA and successive agreements.

That is the context within which the DUP lost the run of themselves in the political institutions, treating all other political parties and wider society in the North with political arrogance and contempt.

As a result the political process has been corrupted with an abuse of political power and institutionalised bigotry.

However a Rubicon was crossed with the result of the Assembly election. The clear message delivered by the electorate was that there should be no return to the status quo.

But the DUP and British government are in denial that the political landscape has changed.  They both refuse to ‘get it.’

The last two phases of talks showed no evidence they are serious about resolving the issues at the heart of the political crisis.

They both want the political institutions back up again, of course; but they don’t want to have to tackle institutionalised bigotry, sectarianism or intolerance within the North.

In recent weeks they and others have been maliciously saying publicly and privately, that in the absence of Martin McGuinness, Sinn Féin does not want a deal which re-establishes the political institutions; is seeking to humiliate the DUP; and is weaponising the Irish language.

They have instead attempted to deflect away from their joint opposition against rights-based government and society in the North.

Together the DUP and British government have become an anti-equality axis, which is the source of the political deadlock.  Unless they step back from that position there will be no progress.  In fact it would appear that is their calculation.

The decision by Theresa May to call the Westminster general election is the clearest indication that the Tory government has now formally disengaged from the political process here, and has made a strategic decision that its policy towards the North of Ireland does not include re-establishing the political institutions on the basis of equality, respect and integrity.

British state obligations under the GFA are now subordinate to the primacy of the Tories’ unionist objectives, and influential opposition from the most senior echelons in Britain’s Ministry of Defence and security services against dealing with the legacy of the past.

These factors dovetail with the Tories’ motivation in announcing the election, which is driven by a right-wing power grab, designed to copper fasten a hard Brexit, and an overall ideological project to reshape Britain as a neo-Thatcherite society.

The Tories have no strategic or political commitment in seeing strong political institutions in the North based on equality and rights, and acting as a bulwark against austerity and Brexit.  That would be anathema to the ideological project they are embarked upon.

This British government most definitely does not want that, while having to contend with an increasingly unmanageable Scottish government in Holyrood.

It is becoming more obvious that the Tories and the ‘Westminster Command’ of the DUP share a position that it would be better not having locally based power sharing and all-Ireland political institutions.

That explains the Tory/DUP ‘tag team’ approach to undermining the Stormont talks and their lack of concern for the deepening crisis, and associated public annoyance.

But significantly, it also suggests that the announced extension of the talks’ deadline beyond the British general election is just another fiction, because they have already psychologically collapsed that next phase before it even begins!

That prospect should be a cause of serious political alarm for all who have invested heavily in the peace and political processes, and who have a stake in the GFA, both domestically and internationally.

In particular it raises very fundamental questions about the passive and semi-detached role the Irish government has played.  Its approach throughout to the progressive political instability and crisis in the North is a national scandal.

In these circumstances the Irish government must clarify; is it prepared to continue aligning itself with a policy of negative, pro-unionist bi-partisanship?

Is it now prepared to live up to its international obligations by standing up against the Tories and standing up for the equality agenda?

And; is the Irish government now prepared to act in the national interest and in defence of the GFA, on the basis of the representations it has received from civic society and progressive parties, including Sinn Féin?

The Tory government has introduced new destabilising dynamics into the political crisis, which is engulfing the peace process.

The Tories, the DUP and other sections of political unionism have never been serious about power sharing and partnership.

Their anti-equality axis is being defined by support for a hard Brexit, austerity, and opposition to a rights-based framework for government.

The role of progressives and democrats must be to stand together on the common ground of supporting the GFA, rights, equality and opposition to Brexit.

The Irish government needs to make up its mind what side it is on.

The entire basis of the Good Friday Agreement is now directly faced with its most serious threat in the history of the peace process. 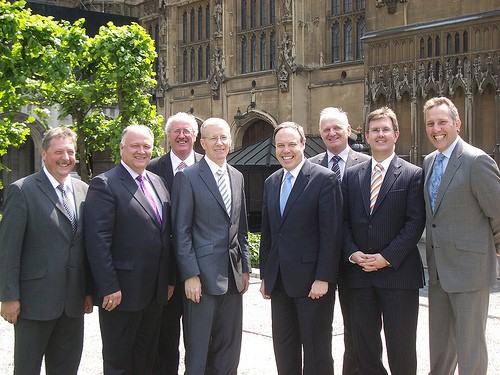