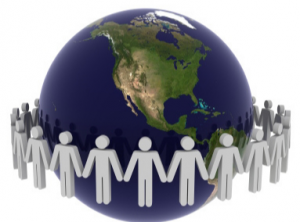 Last night I attended the reopening of St Macartin’s Church of Ireland Parish Hall in Enniskillen. A very large crowd from all sections of the community was present. The Dean in St Macartin’s is appropriately called Kenny Hall. His motto is ‘Hall  together Now’. The ceremony was performed by the very popular bishop of Clogher, John McDowell. The Church of Ireland in Enniskillen now have a fine hall with offices and meeting rooms. They received grant aid from the Special Investment Fund(SIF) which is a fund for projects in deprived areas. Fermanagh is certainly a deprived area.In his remarks at the end, Dean Hall  stressed that in Enniskillen there is one community-not two. While there is a political division here as elsewhere we can still manage to live and work together as one community. It can be difficult when there are so many obstacles but that is the challenge for all especially for the churches- and all the different community groups.

In the Irish language there is an old saying: ‘Ar scáth a chéile a mhaireann na daoine’ – which means the people live in each others shadow. The people here in Fermanagh have a strong sense of community. That is how the Irish people have lived and survived through good times and bad times –especially through times of persecution and famine over many centuries and that is how most still live. There have been and will be closely fought elections but when they are over we have to go on living and working together.

We see the community solidarity most clearly at times of trouble and sickness and at the time of a death and a funeral. There is still in Ireland in most places a great reverence and respect for the dead and a great sense of support for the bereaved – in all faith communities and none. That is how the people have lived out their deepest human instincts and also their Christian faith by referencing Jesus on the Cross with a few of his friends around him.

That sense of community has survived here in spite of the difficulties imposed by partition and political strife and the times of violent conflict. Enniskillen suffered as much as anywhere else.

That wonderful sense of community has taken a battering over the last forty years or more with the many changes that have taken place in Irish society. With the advent of television and the end of the custom of ‘celidhing’ in houses, that sense of local community has been greatly reduced. The mobile phone has also changed the whole pattern of relating among younger people. ‘Texting’ is now as popular as talking.

It would be a great pity if the customs and sense of local community solidarity ever died out. Maybe it needs to be promoted and practiced in a more modern form.  Perhaps one night a week without TV or mobile phones and with people sitting around chatting might make for a more entertaining evening.

There seems to be a revival in some parts of Europe of the old practice of visiting each others houses. In Denmark there is a revival of Hygge which is a similar practice of community living. It would seem that it is slowly coming back in vogue judging by the fact that I now see a number of new books in the bookstores promoting this practice.I also see the growth of walking groups and cycling groups out and about Enniskillen. I believe that anything that promotes community living and togetherness is good. Conversely anything that interrupts community life is bad and damaging to people and their sense of being on a journey together. The Churches –clergy and laity-  have an important role in building and promoting community. They must decide to cultivate community. That is why a facility like St Macartin’s Hall is so necessary. Those who worked to make it possible deserve great credit.

13 Responses to ‘ Ar Scáth a Chéile…’ by Joe McVeigh