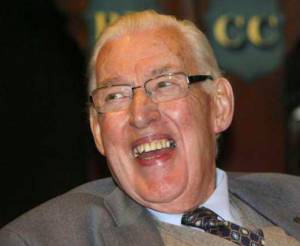 The recent film about Ian Paisley and Martin McGuinness, like all historical films, is littered with historical inaccuracies – anyone with a faint hint of knowledge about the Saint Andrew’s era agreement will know that. But what surprised me about it was the tenacity with which it propagates the narrative that somehow the DUP leader and his followers experienced a classic road to Damascus-type conversion towards power-sharing with the people he vowed to destroy. For let’s  be clear about something, it was the republican campaign which forced the British Government to exert sufficient pressure on the right-wing in the North to accept the expressed wishes of the Irish people regarding the peace accords and institutions; Not the benevolence of the party who’s actions are now actively wrecking them.

To assume Paisley reached this accommodation with the nationalist community on his own would be like regarding F. W. de Klerk and the Afrikaners as part and parcel of the anti-apartheid struggle – when they only conceded its collapse after the ANC campaign and damaging international sanctions. I’m not asking you to take my word for it, because I am not neutral – I want to see “Northern Ireland”, which is here today, to be gone tomorrow. But all you have to do is watch the archive footage of Paisley in his Stephen Nolan interview after becoming Joint First Minister. In that interview, Nolan pressed Paisley on how he could reconcile all his past stances with the practical realities of having to share power with those he was engaged in a war against. The man who once told of Priests and Nuns handing out machine guns at chapel gates.

What struck me about it and I give him full credit for this, was his outright honesty in reply. He didn’t try to disguise the fact that the British Government, which Unionists are never done expressing their loyalty to, actually threatened him openly and his negotiating team. He went on to say that the British Prime Minister, Tony Blair, and his Secretary of State were working alongside Sinn Fein and the Irish Government, all of whom had devised a “Plan B” (his term) for Joint Authority over the North between London and Dublin, in the event that he stuck to his proverbial “guns” in trying to wreck the peace agreements.

He warned, like a prophet from an Old Testament text, that it was either total power-sharing or total oblivion – Ulster would be “heading for a sell out and eventual reunification.” Now in saying that, I admired Ian Paisley’s example while he was First Minister, he genuinely did try to reach out and build bridges in the spirit of neighbourliness. He knew that all of the people on this island have a destiny that is tied up with one another’s. Using the example of Lord Craigavon, he spoke of how the former Unionist stalwart had direct and amicable dealings with the IRA under Michael Collins back in his day and how Sir James Craig eventually admitted partition to be temporary. I believe that Ian Paisley and Martin McGuinness should also have received Nobel Peace Prizes, as they knew the sort of criticism and hostility some people (the TUV and dissident splinter groups) in their own traditions would throw at them for reaching an honourable compromise for the time being – without disregarding the past, they focused on the present.

But I also know that the “Big Man” himself was consciously aware that the republican campaign, particularly against economic assets to Britain (Canary Wharf?), had forced the hand of the British Government to impose a total settlement on the Unionists. If it hadn’t, then why did they not just come to a successful and enduring agreement with the SDLP in the 70’s and 80’s via “parliamentary means”? Even if you take Sunningdale, which was a manifest failure in terms of key reforms (like policing and justice), the British Prime Minister Ted Heath states in his memoirs that it only came about because republicanism was costing Britain too much money and international exposure.

These are difficult things for Unionist people to swallow. I’m not trying to rub their noses in it, and we will never agree on the past; or that the methods of resistance by the oppressed are decided by the oppressors. But they have a lot to learn from Ian Paisley’s example – here was a man who put working class people into politics, rallying them around common cause; here was a man who helped any Catholic or nationalist that turned up at his office; and here was a man who eventually showed the grit and good humour to lead with gentlemanly courtesy with someone he had never before spoken to. In his own words, he once told McGuinness, “Martin, we don’t need all those English people coming over here and telling us how to run the North or how to represent our people’s interests.” And that’s what Unionism lacks at present – someone to rise to the challenge by building on his work and helping to reconcile the two traditions as one society on this island.

I’m not mocking the DUP, because I think there are many very talented and able people within it. Ian Paisley Junior is someone who can reach out and lead by example. I’ve said many times that there are some figures who would make highly effective Ministers in an Irish Government which respects them, instead of being on the fringes of a British Parliament which ignores them. But time and time again they have found that the administration (in London) they vow allegiance to has been all too willing to betray or barter them when expediency demands.

9 Responses to ‘The British Government: Blackmailing The Unionists’ by Donal Lavery