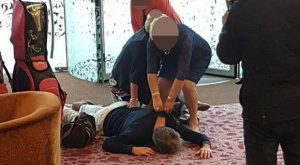 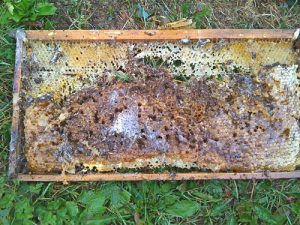 There’s not a whole lot to write about at the moment. You couldn’t scare up a scandal these days for love nor money …..and yet when we had an Executive here in Norneverland , there was hardly a week that went by without some scandalous political nonsense oozing its stink out under the door like some sticky putrescent dogshit. I know, everyone’s forgotten why the place had to be closed down for fumigation, but I haven’t. It was comedy on a stick for ten years and now the show has ended like one of those long-playing boxsets that you can easily get hooked to.
The nearest we’ve come to anything remotely smelling of rotten eggs and scandal is a photograph of TVMike Nesbitt ,the erstwhile leader of a specific strain of unionism ,seemingly taking a nap on the floor of a hotel.I think it was a hotel but details have been vague and unforthcoming. The man could easily have been , drunk fallen down, had a stroke, tripped over his laces or slipped on a banana skin. I ‘v edone a few of those myself. Not much to see there then ,really ….move right along ladies and gentlemen.Sure …we’ve all done that , have n’t we? My Daughter Number Three crashed out at the airport at Hamburg some years back and missed her flight.Panic!!! What to do?!!You can do silly stuff like that these days when old mum and dad are only a cell-phone call away and can magically stump up for another flight by the magic of instant bank -transfer. I can’t talk either….i’ve slept and camped on park -benches all over Europe in my burning youth.I can say that it never rained on me once.so what of TVMike? There’s hardly much news there now is there? Can’t a man lie down on the floor anymore , crash and catch a few ZZZZZZs without the world and its dog pointing their cellphones at him to take mucky paps ?No scandal there , which is why i’ll write about my honeybees instead .There’s far more drama going on in my hives at this time of year than there is in the political sphere. I’ve even become bored with the madness of Donald Trump, for chrissakes!
You might have noticed that I’ve been somewhat busy of late……

Wax moth! now there’s a beastie to conjur with. I was inspecting my spare hive equipment a few days ago .That’s the kind of thing made possible by this current splurge of glorious sunshine .The sunshine comes so late in the year here that all those garden jobs pile up waiting like some avalanche to come crashing down all at once.
Five hives are working reasonably well.There is one ; there usually is, which is hammering away like gangbusters , hardier and more virulent than all the rest .I’ll have to keep an eye out for swarming with that one. I’d hate to lose a queen with so much vigour, but knowing my luck , she’ll decide to abscond with half the troops when I’m away for the weekend.
Like I say , all seems well with living hives so far.It’s the stacks of spare wax-frames which have taken a beating. They had been drawn out fully by the honeybees last season but had never been used. I had kept them spare in case some frames needed replacing. Unless they are defended by honeybees they can be prone to infestation by other wild creatures looking for a bed for the winter or some free lunch. Earwigs, slugs and the infamous waxmoth can really mess up perfectly good equipment. That is what has happened with a box of brood frames and a a box of honey supers.I had sealed them up , but obviously not enough. This moth’s offspring creates a mess of muddled silk while it eats its way through all that lovely prepared wax. They’ll also burrow into the wood of the frames. I had to pull out the boxes and tear them all down ready for replacement wax sheets and clean all the mess from the frames while dismantling them .It is time-consuming work and it can’t really be hurried. All that mess plus the reddish propolis and wax residue had to be scraped off before I torched each frame with my trusty blowlamp to kill any eggs or maggots that might be lurking in the corners. They are now soaking in buckets of diluted hypochloride in readiness.
That’ll teach me to leave empty frames outside untended. You can never be fully prepared for any eventuality .I’m assuming TVMike knows that too, by now.

View all posts by Harry McAvinchey →
‘ Ar Scáth a Chéile…’ by Joe McVeigh
Last night: on the couch me and the cat, on the telly Michael McDowell

3 Responses to THE CURSE OF THE DREADED WAX MOTH