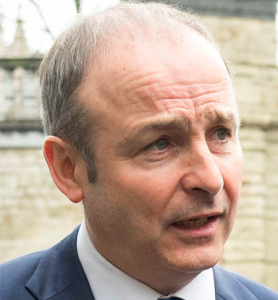 I’m sure I am not the only person in Ireland who believes that Mr Martin lacks the qualities to be a successful leader of Fianna Fáil. This after all, has been the natural party of government in the south of Ireland for almost a century – only a handful of times has that not been the case. One of the things which troubles Mr Martin is the short-sided nature of his memory, which I will allude to later. During the last General Election to the Dail, he displayed a certain ambiguity at times about a potential coalition with Sinn Fein, playing the proverbial “poker face” with each interview.

Now I believe that a coalition with Fine Gael would be a disaster, for obvious reasons – they care nothing about Irish unity or peace in the North, while possessing monetarist economic policies. But it is my view that inevitably a national unity government between Fianna Fáil and Sinn Fein will emerge when both parties have a similar number of seats. A government which rotates the office of Taoiseach and shares all Ministerial departments fairly. But such an arrangement would only be possible by way of returning to Keynesian economic methods and by efforts regarding the resolution of the Northern question once and for all. Otherwise, it will end up with the larger party absorbing the smaller, whoever that might be.

Such a government, with a Sinn Fein Finance Minister, would be a popular sell to the hearts and expressed needs of the Irish people. Both parties, when they go to the White House for Saint Patrick’s day, commend the vision of Irish-American patriots in waging revolution against the British on the fields of the former colonies across the Atlantic. So surely it isn’t much to ask that Mr Martin acknowledges Irishmen and women who waged revolution on the streets of Belfast and Derry against the very same foe.

After all, it was his party in the 1970’s which tried to arm the IRA while in government. It was members, Senators and TD’s from his party (and even Fine Gael) who provided refuge to Irish men and women on the run, sheltering exiled patriots during the conflict. Remember folks that when Fianna Fáil say they will never go into government with Sinn Fein, Fianna Fáil also stated at one point that they would never take their seats in Dáil Éireann. Indeed, brave men and women within Fianna Fáil, like Sean Lemass, entered the Irish Parliament for the very first time with loaded guns in their coat pockets – fearing the Cosgrave government would stage a coup d’etat with the Free State Army. They never gave up weapons for decades later, even after periods in government.

So if Mr Martin is going to keep raining on the idea of a government that could meet the wishes of the Irish people, then maybe Fianna Fáil need to rain down on Mr Martin. Their former Deputy Leader, Mr O’Cuiv, has already outlined his preference for coalition with Sinn Fein over Fine Gael. Now this current minority government isn’t going to last a full parliamentary term, everyone knows that. But if the arithmetic adds up after the final votes are counted next time, then the question facing Mr Martin is a simple one – A Nation Once Again?

View all posts by Jude Collins →
Last night: on the couch me and the cat, on the telly Michael McDowell
‘A letter to the Irish Times’ by Donal Kennedy

2 Responses to ‘Fianna Fáil & The Provisional IRA’ by Donal Lavery