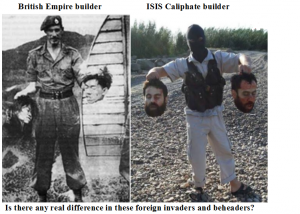 Did British Empire builders and ISIS Caliphate builders perpetrate the very same crimes? Yes. Both invaded countries and engaged in mass murder of civilians. Both foreign entities beheaded, tortured, raped and robbed native peoples. Can this plain and accurate comparison be credibly denied? No!!!

‘Britain’s governments and civil service have been engaged in the greatest identity fraud of all time – the dishonest and manufactured creation of our understanding of the British nation, our history and our culture’ – from The History Thieves by Ian Cobain

British state leaders and their forces: the regular British Army; UDR militia; and RUC police, claim they upheld the law in this Northern Ireland colony statelet. They claim, they were protecting civilians from opposing paramilitary groups. However, during our most recent conflict between 1969 and our peace deal agreement of 1998 they killed mostly innocent civilians, not members of paramilitary groups. Furthermore, they colluded with British Unionist terrorists in the murder of hundreds more native Irish Nationalist civilian citizens.

Add to their aforementioned illegal acts, British state forces harassed, dehumanised and beat Irish Nationalists during daily pedestrian and vehicle check-point stops, property searches and sectarian raids into known Irish nationalists districts. They unjustly arrested, tortured and falsely imprisoned thousands of Irish citizens. And contrary to British propaganda, all these many tens of thousands of human rights abuses were not the actions of ‘rogue elements’ but rather part of the very same British state policies used extensively in its other colonies.

It’s time British people acknowledged, the conduct of evil ISIS pales compared to the British Empire which invaded 9 out of 10 of the world’s countries and killed an estimated 180-240 million (if one includes deliberate starvation programmes such as in Ireland and India etc). During these endeavours the British state built-up an inglorious legacy of debasing, enslaving, torturing and slaughtering civilians and assassinating political opponents in pursuit of its colonial objectives. This it did across its colonies in Ireland, India, China, America, Africa, through to Egypt, Iraq 1920’s, Palestine 1930’s, Malaya 1948-60, Cyprus 1950’s, Kenya 1950’s, Cameroon 1960’s, Malaysia 1965-66, Aden 1960’s etc.

Today, the British state along with others secretly fund and arm Al-Qaeda offshoot terrorist groups in the middle east. In 2005, British state special forces armed with explosives and firearms were caught masquerading as civilians in Iraq. This unit was presumably intent on perpetrating false flag ‘counter-gangs’ operations similar to those perpetrated in Ireland in the 1970’s: plain-clothed British MRF/SAS units shot Irish Nationalist civilians with the aim of stoking internecine conflict with British Unionist citizens. 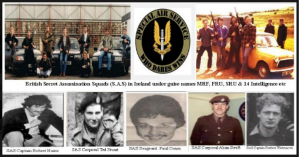 ‘If it is necessary sometimes to lie to others, it is always despicable to lie to oneself’ – William Maugham.

Finally, using terms such as ‘a state legal force’ and ‘illegal terrorist organisation’ provides no answer to the all-important question: is there ample evidence to prove that British colonial state forces in Ireland systematically broke its own laws, murdered mostly civilians, and thereby lost any right to claim the moral highground in our conflict?

View all posts by Jude Collins →
Enda Kenny: he did it his way
‘Seize The Day’ by Randall Stephen Hall