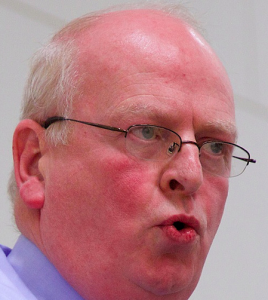 It must be hard these days to be a bread-and-butter person, especially if you live in our little NE Nest. Bread-and-butter people have always urged our politicians and the electorate to focus on practical matters: having a job, being able to feed and clothe your family, paying the mortgage. Steering clear of  out-moded rubbish about Irish reunification and what flag flies above us and whether partition should stay or end.

Why is it hard to maintain this food-on-the-table approach? Because it’s suddenly becoming clear that the day-to-day is inextricably linked with what some have been wont to declare grandiose and out-moded.

Let me give you an example. Last night, around eleven o’clock, my cat passed out. We’d been sitting watching The View (yes, sad isn’t the word), when without warning, Michael McDowell came on. You’ll remember Michael. Used to head up the Progressive Democrats in the south,  spent much of his time scoffing at republicans and particularly Gerry Adams, for going on about a united Ireland. Last night Michael looked redder in the face and much plumper, but that wasn’t what stunned my cat. It was that Michael was explaining how, since Brexit, the whole question of Irish reunification was now much more likely. “Say whaaaat?!” the cat screeched in Siamese before falling rigid on its back, paws in the air.

And it’s not just McDowell. People who scorned the debate over the constitutional question as a reactionary waste of time are now suddenly realizing that the existence of the border, and the kind of border, could have big ramifications for all of us.

Complicated? Not really. Those who have argued for the union with Britain have done so on two grounds: we’re British and besides, who wants to be dragged down by a bankrupt republic? Since Brexit, the situation has flipped. Those who see themselves as British are being urged by their politicians (Good morning, Ian) to get themselves Irish passports. The more pronounced the border, which once protected British citizens in the north from the Popeheads of the south, the worse news it is for bread-and-butter people on both sides of the border. We in the NE nest have expressed the wish to stay in the EU with all its economic advantages, but now must prepare to be dragged out of the EU by… Mother Britain. While the UK economy goes down the tubes and takes us with it – in fact, we’ll be the first region to hurtle into the sewage system – the south will retain the benefits of being an EU member, and will  benefit and grow fat as hard-headed multinational companies  take flight from Go-It-Alone Britain and seek a place south of our border.

There’s no dodging it: John Hume’s da was right. You can’t eat a flag. But in the next five years, the flag flying over us will make a huge difference on our ability to have a job and feed our families. Gregory Campbell once told me it didn’t matter how much better off the south was than here,  we’d still not want to join with them in a new Ireland. As my former colleague at the VO Brian Feeney has pondered, might a few years eating grass  change a few minds?

12 Responses to Last night: on the couch me and the cat, on the telly Michael McDowell