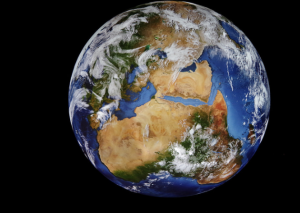 There are a number of threats to our planet Earth. Firstly, climate change could have disastrous consequences if human beings do not change their habits to reduce greenhouse gas emissions. Secondly, there is pollution of our waterways and seas which will destroy marine life. Thirdly, Nuclear weapons and nuclear warfare could destroy the whole human race and make the planet uninhabitable.

The Paris Agreement on Climate change in 2015 was a step in the right direction. 147 world leaders signed up to this agreement which means limiting the rise in global temperature to 2 degrees Centigrade. It is up to each nation to set national limits. The Paris Agreement came about as a result of campaigns by ‘ordinary people’ putting pressure on the governments of the world to act. There is urgency about this situation. Every day of inaction is a day closer to disaster for our planet. There is a huge responsibility on each of us and on all of us to act together. There is a huge responsibility on the world leaders to act now.

The US President, Mr Trump, says he does not believe in climate change. He thinks it is fiction! In this he is going against all the scientific evidence. He is rejecting the call of Pope Francis that everybody, especially political leaders, must take this matter seriously. The USA and China are the world’s leading polluters. Mr Trump says he is thinking about pulling out of the Paris Agreement. It is hoped that his recent meeting with Pope Francis may have resulted in a change of mind.

Pope Francis reminds all that the saving of planet earth ought to be one of our main goals in life. If those who belong to the Catholic community are going to help save our planet from destruction we must unite with all other religions and all people of good will on this planet. We must encourage our young people to take up this issue and make their voices heard. We just cannot save the earth on our own. This has to be a worldwide co-operative effort -like nothing ever before. It must involve people of all ages and nations.

This calls for conversion- a change of heart- as Pope Francis has intimated in his letter to the world, ‘Laudato Si – On Care for our Common Home’. It calls for a change of heart from each one of us and from the leaders in our churches who must overcome their reluctance to change. It calls for political leaders to commit to saving the planet by taking actions to reduce carbon gasses.  There are 40% more greenhouse gases in our atmosphere than 100 years ago. Every year temperatures are breaking records around the world. It is estimated that 225.000 species of plants and animals could be lost by the end of this century.

Pope Francis calls on each of us to take seriously the threat to our common home, to reduce the consumption and waste, to live more simply, to reduce our carbon footprint, to act locally and think globally about the consequences of our actions, to recycle and repair. It calls for farmers to realise the damage being done to the ozone layer by intensive cattle farming and beef production. The farming community and government must look at alternatives. We must recognise the importance of biodiversity and what we can to promote it – planting trees, hedgerows,  flowers, growing some of our own food, buying local, organic produce ( no harmful toxins)  and composting organic waste to nurture the soil as it is being seriously depleted by us. (LS 32ff)

As former US President Barak Obama has said:  “We’re the first generation to feel the impact of climate change, and the last generation that can do something about it.”

View all posts by Jude Collins →
SEAN SCEAL by Donal Kennedy
‘The British Government: Blackmailing The Unionists’ by Donal Lavery