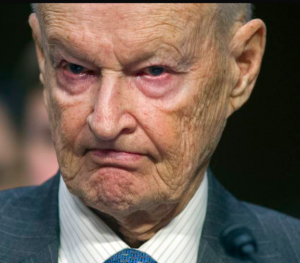 The obituary in THE TIMES (29 May) of an ex- National Security  adviser to the United States illustrates the debt of gratitude we all owe to that super-power, its satellites, puppets and sycophants for sleeping secure in our beds. I quote –          “On Brzezinski’s watch China received support for backing Pol Pot’s regime in Cambodia to ensure that Soviet-backed Vietnam did not muscle in, while the mujahidin in Afghanistan received millions of dollars of funding after the Soviet invasion of 1979 – a policy that would come to haunt America more than two decades later…                                              ,

The Cold War impasse nearly brought Brzezinski- and much of the world – to an early end in November 1979 when he was awoken by an aide at 3 AM to be told  that 250 incoming Soviet nuclear missiles had been detected. While he was contemplating the matter another call came saying that the number was 2,200. He was about to alert President Carter when a third call came saying it was a false alarm.”.

View all posts by Jude Collins →
Jeremy vs Theresa: did you laugh?
Jeremy’s Enemies by Joe McVeigh

One Response to SECURE IN OUR BEDS? by Donal Kennedy