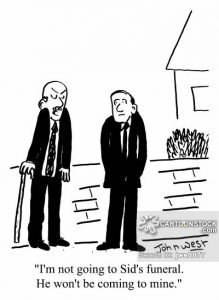 “I’m not going to Sid’s funeral, he won’t be coming to mine.”

Nelson McCausland is on the radio , wittering on in the lugubrious ,disingenuous, deliberately measured way he sometimes does , speaking slowly as if to add extra weight to his pontifications, or possibly because he imagines, mistakenly, that his words carry some weight. He appears to be dragged onto the airwaves almost daily to rail tiresomely about some latest republican affront.This time it is Michelle O’Neill the Sinn Fein leader who has annoyed him ,appearing to commemorate some dead republicans at a remembrance ceremony in memory of their deliberate killing by a large number of the SAS in a covert operation, some thirty years ago.
The dead had to be some mothers’ sons.
The Sinn Fein leader has said she was proud of her republican cohorts in the past and this upset Mr McCausland and any supporters he might have .You might imagine that there would be no great surprise that one Irish republican might be proud of other Irish republicans ,but Mr McCausland seems shocked , even after his party has shared power with the same republicans for many years and are still positively aching to get their arses back into power with them on those same seats again .To hear him you’d imagine that Mr Mc Causland was unaware of the conflict that had ended some twenty years ago and the actual causes of that conflict. To hear him, you ‘d imagine that the dead should be simply erases from memory.
How does he imagine we have arrived at this point , with people across society of every stripe, remembering their dead brothers, sons and husbands? You wouldn’t need to believe in the rights or wrongs to understand that the familial dead will be remembered with fondness. Even the most horrendous criminals will be remembered fondly by their friends and family. In any case ,in Norneverland , the past is remembered with an obsessiveness which borders on OCD. War memorials to the British army , rather than Peace memorials ,bedeck every town and each year the sons and husbands of men who in the past had gone off to kill or be killed are routinely remembered with much ceremony. Little thought is given to who they might have killed in foreign lands or nearer home and the actual “rights or wrongs” of their actions. The war-dead from African or Indian campaigns of the 19th century are remembered .The Boers, the Japanese and the Germans all feature in these conflicts but it is not the dead of those places who are being remembered .That chore will be left to their own kinfolk , whoever and wherever they might be . In 1943 Italy changed sides in World War 2 and became an ally rather than an enemy within a month, so who knows who or how they might be remembered.
One thing is sure, that when the British Army is remembered here , mostly by only one section of the community , they could do no wrong. Poppies continue to be sold annually by the British Legion , ostensibly for the dead of World War 1, but in reality for every dead british soldier .There will be no mention of the deaths they were responsible for while they “policed” the various conflicts. There will be no mention of the murders abroad or the dark collusions they made with the murdering criminals within loyalism , the RUC , the B-Specials and within their own ranks ,whom they supplied with armaments, information, succour and alibis .There will be no mention of the many deaths of ordinary folk with no connection to any kind of army or organisation and the files that were deliberately lost or destroyed to cover up their iniquities.
Besides all of that ,on a more localised level, the commemoration of conflict stretches back in an unbroken line for hundreds of years, to the Plantation of Ulster and earlier and is exemplified and marked in thousands of mostly Orange Order marches and bonfire fests throughout the Marching Season which denigrates one section, the Nationalists , (virtually half of the community) on an annual basis. There is talk of these being “traditional “festivities but only one section of the community can ever see it in such a way when it walks on the graves of their families and their ancestors and its banners remember their enemies.
As for Nelson McCausland…he need to take a closer look at why he thinks it is right for this annual behaviour to happen and why if he thinks it should continue forever ,there might not be an equivalence on the republican side of the argument.

View all posts by Harry McAvinchey →
Reuniting Ireland – a letter to the editor…’
John Finucane in North Belfast: five reasons why it makes sense

5 Responses to TIT FOR TAT