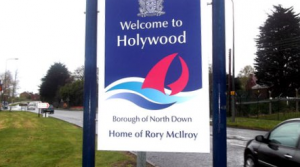 No place has kept a sharper eye on the going downs in Downing Street during the last strong week than a little town in the old County Down called Holywood. Which is, as the local bumf has it:

In fact even the local fillum buffs in particular could not get enough of the momentous events even as they unfolded in front of their cinemascopic eyes. None could have dared to dream up a more good-to-go scenario than the sight of the Billion Dollar Baby, fresh from her Orange Crushing defeat of Theresa ‘Money’ Mayweather, and she to be emerging with the chants of her cornerboys still ringing in her ears –Dodsy with the sponge shouting Lunge ! and   Dodge ! while   The Donaldson on the bottle was roaring Duck ! and Ye hov her Rottled ! – to the count down of Number:

Yes, the sight of newly trimphant Arlene ‘The Notorious’ Foster and she to be returning home to her native provinceen to the enchanting chant of:

And it to be ringing like a cash-register in her delightfully domineering ears.

From the studio apartments of Holywood, Couny Down rose up the cry:

It seems one just cannot keep a good county down, these days. Can the glory days of thirteen and twenty three years ago, with four at the end before – when the county did the double – be on the verge of, erm, DUPlication?

-Time to remake ‘Million Dollar Baby’ to the tune of a…..Thou !

Scarcely indeed had Billion Dollar Baby been seen to slide with a the vertical glide from Number 10 than a celebrated Sindo scribe, much loved for his anti-tribal diatribes – penned this theme song, under the lyrical penanme of Polonius Arras, for the remake of the motion picture: nor did he refrain from making his refrain known to his pin up gal of the Thou Million Dollars.

Thou swell! Thou witty!

Thou sweet! Thou grand!

Both thine eyes are cute too;

What they do to me.

Hear me holler I choose a Sweet lollapaloosa in thee.

I’d feel so rich in a hut for two;

Two rooms and a kitchen I’m sure would do;

Give me just a plot of,

Not a lot of land,

And Thou swell! Thou Witty! Thou Grand!

The scenario of the remake , on closer inspection, keeps getting better; what with the simultaneous rise of one party and the simultaneous demise of another Westminister Party, each equally pledged in their allegiance to the English-speaking thou non Scots Ulster-speaking German Queen.

Thus handing to Holywood on a silver salver, the recipe for a tip-top ocean-spanning motion picture:

The party which went up was, of course, Provisional Sin É while the party which imploded (after decades of denouncing those the parties who exploded) was, sadly, the SDLP up and go party.

In his report in The Unionist Times which at once managed to be both lugubrious and hilarious, Gerry Mor-i-ar-IT had this to bray:

‘One veteran SDLP source whose involvement in politics dates back to the civil rights days of the 1960s has a very concise take on why his party now has no seats in the House of Commons.

“It’s impossible to resist a tribal juggernaut,” he said.

Now, who on earth could this mysterious veteran be ? Might the clue lie in his choice of language: especially, the T-word, so beloved of TUT:

And, naturally, the J-word. Could he possibly be referring in code to (gulp) .

The Nameless One who is not Named nearly as often as he would wish – was the Irish Light Heavy Shadowboxing Champ of the Tribal Homelands during the 70s and 80s in the gloriously muzzled and anti-Fuzzy Wuzzy reign of Bwana O’Brien.

For it was the latter who introduced the sport of shadowboxing into political discourse in the Free Southern Stateen according to the rules of Marquess of Queenbury BUT with the following amendment:

This strict rule restricted any of The Nameless One’s opponents from even entering the same ring much less laying a glove on the Luvvy of Liffeyside.

After Section 31 was lifted The Nameless One or The Southpaw from the North moved over to the Mainland, to swop Markethill for Haymarket where he could continue to swing his haymakers with impunity, albeit, this time, unnoticed.

Here he , in his own words , ‘ distinguished himself’ in the Memsabhib of Parliaments. Sadly, this distinguished service has gone – thus far – unrewarded. Unlike, say Lord Bill’s Hell   of the Sliding SDLP Spectacles, no coronet enormous enough has yet been found to, erm, fit the gigantic, melon-shaped head of The Nameless One.

Happily,he has kindly agreed to act as special advisier in the deft art and hefty craft of shadowcabinet boxing for the upcoming remake.

So ecstatic are the swooning Southern Yunes at the V for Victory of the Billion Dollar Baby in the showdown at Downing Street that there has been an upsurge in memsahibership,oops, membership in the hitherto moribund Bung Ireland Movement: reports have been received of wreathts being laid at the statue of Tommy Davis, Jnr on Dame Street.

While the methodical actress Arlene ‘The Notorious’ Foster, naturally enough, gets to star as ‘Billion Dollar Baby’ in the role of , erm, Maggie FitzGerlald in this, her very first Holywood Production, the choice of the actor to play the role of her boxing trainer is also a no-brainer.

The hint lies in the name of the actress who played the role in the mere ‘Million Dollar Baby’:

The 3 Eastwoods of Holywood (one L) came to mind:

Barney, might well fill the (nouveau) swanky, erm, gaps between the two reps of Clintonia, but in the end it comes down to a toss up between C. Eastwood and C. Eastwood.

The latter, being turfed out of a job as the Turfcutters’ Rep in the green Bogoak Monolith seats at Westminster, wins the toss of the two-headed (no harp) coin.

Thus will Whatchamaycallem Eastwood get to fill not only the role of Frankie Dunn–for but such is the amount of spare time on his idle hands, he also gets to direct the fillum as well.

There well might have to be a box-off between Dodsy and The Donaldson (see above) for the role of Eddie Scrap-Iron Dupris which was originally played by Morgan Freeman.

This will no doubt call to a slight tweak of this character’s name:

On the hard-headed Protestant basis that it is not broken don’t fix it, tweaks will be kept to a minimum for the remake.

Thus, C. Eastwood will see to it that, erm, Maggie ‘Out! Out! Out!’ FitzGerald will get to wear a green dressing gown with a Gaelic motto embroidered in silk lettering:

(If the superannuated SDLP leader has any difficulty with the pronunciation he can always call upon the services of his fellow Londonderry native, the Gregorian Cantor of The Provisional Sin é Party).

Eddie Norn-Iron DUPris will also have his dialogue ever so slightly tweaked to suit the role of Billion ratheer than mere Million Dollar Baby:

– She came from the far end of Fermanagh, the hills outside the scratchy-ass Ozark townland of Dernawilt, set in the cedars and oak trees, somewhere between nowhere and goodbye.

Frankie Dunn–for, in the pivotal scene, even as he exits (for the last time) Downing Street:|

-I think someone should count to 10.

Maggie Fitzgerald, at the end of her not-incosiderable tether:

–I can’t be like this, Frankie. Not after what I’ve done. I’ve seen the world. People chanted my name. Well, not my name, some damn name you gave me. They were chanting for me. I was in magazines. You think I ever dreamed that’d happen? I was born two pounds, one-and-a-half ounces. Daddy used to tell me I’d fight my way into this world, and I’d fight my way out. That’s all I wanna do, Frankie. I just don’t wanna fight you to do it. I got what I needed. I got it all. Don’t let ’em keep taking it away from me. Don’t let me lie here ’till I can’t hear those people chanting no more.

Frankie Dunn-for:   What are you doing?

Frankie Dunn: I’m not your boss and that bag’s working you.

Eddie Scrap-Iron Dupris: Well you just protected yourself out of a championship fight! How do you say that in Gaelic?

(How Dodsie or The Donaldson would enjoy getting their gobs around that snatch of dialogue, whatever about the Loyal Oath of Allegionaire C. Eastwood).

– Maggie always did like taking ’em out in the first round.

(You could sing that, Eddie: see ‘Thou swell’ above)

Frankie Dunn: Keep your head back.

Eddie Scrap-Iron Dupris: Why don’t you talk a little Yeats to her? Show her what a treat that is.

(A holy terror is born).

Eddie Scrap-Iron Dupris: Seems there are Irish people everywhere, or people who want to be.

Frankie Dunn-for: [Reads a script from a book in Gaelic]

Eddie Norn-Iron DUPris: What the hell kind of language is that?

Eddie Norn-Iron DUPris: See the way she did that? Sugar Ray could do that. The girl’s got Sugar!

(Let’s hope Iris doesn’t got wind of the word).

Only one fillum is expected to challenge BILLION DOLLAR BABY for the Oscar. That is a foreign-language movie (Spanish) (working title: Rosaria’s Chopper) currently being shot in Venezuela, in which a hijacked helicopter is seen to drop hand grenades on goverment property. It is rumoured to be loosely based on a similar incident in which milk churns were dropped on the RUC station in Strabane in 1974.

The pilot’s name is (gulp) Oscar Perez, a rogue cop.