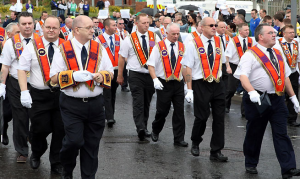 All the pundits seem satisfied that the talking is over until the Autumn. Monday is just for the optics, and we’ll all settle down for the Summer break.

Except that some things don’t take a break and one of them is arrogance. For the next couple of months, we’ll be subjected to drum-thumping, baton twirling bands whose central purpose is to remind everyone, and maybe especially themselves, that over 300 years ago, a Catholic English king was defeated by his Protestant son-in-law king. Oh, and that this is our wee country.

I wonder how, in 100 years, history will judge the Orange Order. We can guess from looking at how it judges the Order during the twentieth century and the nineteenth century.

The Order has always been a reactionary and divisive force. In the nineteenth century, it was opposed to Catholic Emancipation, the Great Reform Bill and any progressive policy they were confronted with. Their marches attracted drunkenness and violence to such an extent that the British government banned the Order for a number of years.

In the twentieth century they rejected the Good Friday Agreement, they fumed when confronted with a ban preventing them marching down the Garvaghy Road. As a consequence innocent people died, including three young boys who died when their home was petrol-bombed.

In the twenty-first century, the Order has made determined efforts to present a more acceptable face to the world, even creating a comic-strip hero and referring to the Twelfth celebrations as Orangefest.

What does this society sorely need? A coming together in genuine reconciliation. Will the thousands of Orange marches this Summer aid that reconciliation in any way? Au contraire. It’s true that for many Orangemen, the Twelfth is simply a bright day out in a dull Summer. But it comes under the banners of an organization that has always regarded half of the population here as not just inferior but anathema.

Sad, sad, sad. And it looks as though the DUP will show the same willingness to change as the Order to which many of them belong.