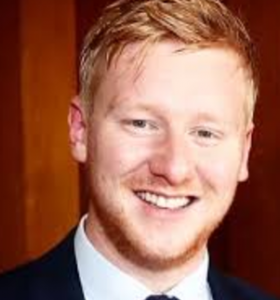 SDLP politicians always have larger than life egos which their erudition and analyses skills rarely, if ever, appear to live up to; and by God this isn’t lost on Danny Boy dearest. From the beginning, there was quite a rift over his selection as a candidate for the Assembly, with some SDLP folk resigning and others having alleged misconduct against him in a letter of complaint (reference below). But given Mr Eastwood’s dismal failure to revive the SDLP’s fortunes, it would seem likely that Mr McCrossan may be elevated as a replacement soon, in an attempt to put a new young face on an old, expired party. Or they may even become so “green” they will start recycling their past leaders. But he has a problem, a rather big one in the “scheme” of things (no pun intended), given that it brought down the Executive and is the subject of a public inquiry – including an investigation of who advocated for RHI and why.
Here’s the guy, and a law graduate at that, who went on social media to publicly castigate Sinn Fein for closing the RHI scheme to any new applicants, using his Twitter account to ferociously attack the conclusion of the Renewable Heat Initiative last February. He opined, in lamenting Jonathan Bell, that to end this disaster would hurt businesses and create a mere “call-centre economy”. Then, in all his Greek hubris, this quintessential Redmondite went on to ridicule the same scheme he was once fundamentally supporting, come October – when he thought the dust had settled in the public memory. People aren’t goldfish, Daniel!
Here’s the guy who puts every other party’s expenses on social media, while overlooking the fact that Alasdair McDonnell has one of the highest amounts of all MPs from the North, including substantial mortgage interest, but a farcical attendance record at Westminster. Here’s the guy who overlooks the allegation that Carmel Hanna, the former SDLP head of Stormont’s ethics watch-dog, was claiming office expenses for nearly a decade on an office owned by her accountant husband. Here’s the guy who thinks taking his seat in the British Parliament is going to inhibit the Tories from using the Royal Prerogative to force through their Brexit arrangements – when clearly he knows the intricacies of UK law.
Now people will forgive someone for getting an answer wrong, but what they won’t do is forget about someone getting their overall judgement wrong on such a controversial issue that will cost the public a fortune for years to come. As an auditor-in-training, I don’t need to write an article to put this man in his place, Barry McElduff handed him his proverbial head on a plate at a recent hustings, but I think this earlier episode of support for something he is now trying to capitalise on politically via public anger should be noted by any honest, self-respecting person. You can fool some people some of the time, but not all the people all of the time, Danny Boy! And to think this guy, with all his wisdom, is a member of our Public Accounts Committee? To think he is now being stood as a Westminster candidate after advocating for this bloated waste of public monies? If you didn’t laugh you would cry!
-The information for this article is derived from media coverage by the Irish News (an SDLP-centric  paper), the (Unionist) Belfast Telegraph and other outlets – including the SDLP’s own website from the time (links below); so that Daniel McCrossan or any of his associates do not feel wrongly represented therein.

30 Responses to ‘Daniel McCrossan: The Hypocrite’s Hypocrite ‘ by Donal Lavery