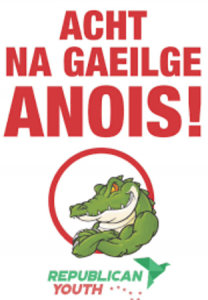 A few factual matters, so we’re clear about what is being asked for up at Stormont and what was agreed prior to the present Stormont talks.

That’s a statement from the recent Tory-DUP agreement which commits the DUP to doing their master/mistress’s bidding for the next two years. Everything in the GFA, the St Andrews Agreement and any other agreements will be honoured in full by the Tories and by the DUP.

So why, then, is the DUP refusing to demand that its partner in the British government do just that in terms of an Irish Language Act? Because here’s what the St Andrews Act says about Irish:

“The [British] Government will introduce an Irish Language Act reflecting on the experience of Wales and Ireland, and will work with the incoming Executive to enhance and protect the development of the Irish language.”

But their joint statement under 1. above commits them and the British government, working together to implement the GFA and all other Agreements, including obviously St Andrew’s. So what are the DUP now wasting time at Stormont for, when they said a matter of days ago that they (and the Brits) would deliver on all previous commitments? Or are we to take it that the reneging on the St Andrew’s Agreement is now to be joined by the Downing Street pact as, um, misspoken less-than-truths?

Fold or flicker or present it how you will, the DUP appear to work in a world of logic foreign to the rest of us. They say they are for the softest possible border between north and south, yet they urged Brexit, which inevitably will harden the border to a greater or lesser degree. They say that they never agreed to an Irish Languages Act, even though the St Andrews Agreement contains a specific commitment to same, and was signed by the DUP along with the other parties involved. And they say that they’ll adhere fully to previous Agreements, but even though  St Andrews commits to an Irish Language Act, the DUP up at Stormont today will be blocking the path to an Irish Language Act.

Why do I hear the phrase “Couldn’t believe a word out of their mouths” echoing and bouncing around in my brain?

35 Responses to The DUP: its word is its bond. Or something.