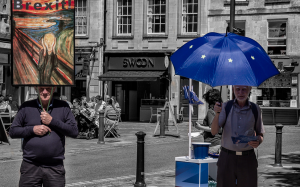 As Dominic wrestled with the cap of the petrol tank in my car , I studied his appearance. He was a medium-sized young man, aged between twenty-five and thirty, with sleek black hair.

He was obviously a non-national. So, after initial comments on the weather , I asked him where he was from . Poland , he said, I’ve been here five years and I’m very happy.

I mentioned that political affairs in Poland were in some turmoil. He agreed, saying the Government had become very autocratic ,trying to limit free speech and rein in the media. He moved on to the general state of Europe with the right wing rising in Austria, Hungary France and Italy , even in parts of Germany, not to mention Brexit .

The result in Britian , he said , could leave him and many other immigrants like him locked into weak economies and incapable of travelling for economic opportunity due to major curbs on freedom of travel.

Having thanked him and paid , I moved on.

His words had set me thinking on the whole referendum debacle , on Gove and Boris and Farage- on their lies , their delusions , their fake news –their torrent of populist nationalism , their historical negativism towards European integration, their problems with accepting any major limitation of their sovereign powers.

They had campaigned on the slogan “ Take back control” and riding on the explosive issues of immigration , chauvinism and racism , they claimed a surprising victory , thereby taking back for Britian “ its borders , businesses and benefits “

What actually happened next was Cameron, having become unstuck on his major gamble on a referendum and having failed miserably in his remain campaign, stood down. The remain campaign had at times also been disgraceful .

They had deluged the people with a fear campaign which was full of lies and political personal abuse.

British politics descended into chaos. The British political elite began a spate of personal attacks on each other. Wounds widened , anger and division abounded The bile and irrationality on show was extraordinary.

A campaign to succeed Cameron ensued . The buffoon Boris Johnston was installed at 8/15 favourite with the bookies until he was stabbed in back and front by Michael Gove , who opened the door for the hapless Theresa May , a lukewarm Remainer before the vote, now landed with the task of getting the British out of EU.

The behaviour of the senior Tories in their treachery , hypocrisy, recrimination and open hatred surprised even their admirers. To me , a moderate Irish nationalist, with memories of repeated injustices by Britain to my native land, the whole charade of their animal behaviour was a source of comedy , tinged with sadness.

The sadness arose from our dark history and the story of our aristocracy who had been had been slaughtered , pillaged and plundered by the ancestors of these pitiable people. How foolish we were to ever regard them as capable and to allow them to paint us as inferior.

Whatever happens to Britain as it sails into the inevitable isolation of being outside the European Union , as it tries to sort out immigrant issues , trade and manufacturing issues , travel restrictions , foreign investment , revocation of aspects of European law, etc , my sincere hope is that all this will not have major negative effects on Irish interests. I worry because Britain under Cameron wasoften our friend in Europe, and Britain may now sacrifice our interests in looking after its own.

In a global political world, where self interest is a major value in international affairs

View all posts by Jude Collins →
Dromore, Co Tyrone and not really being Irish
STATE BUSINESS by Donal Kennedy

One Response to ‘The end of empire!’ by Pat Wall