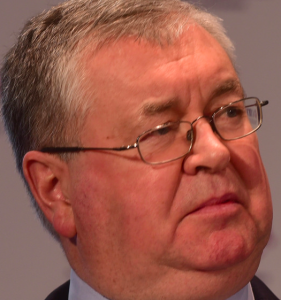 Very clev of Mr. Duffy of RTE Radio 1, all the same, to invite Trev on to his show to –

Unless of course it was Trev himself (NI having just gone to h. in a hand cart) who actally took the smart intiative from his base in Belfast to pick up his upwardly mobile phone to dial the Duffy number downwardly in Dublin and-

Who contacted Whom was not made clear. Neither was it made (abundantly) clear whether Trev is still actually a member of the Norniron Conservatives when the q. was p. to T. even as Joe greeted him in that Duffy-deferential tone of his which he invaribly adopts when talking to a (gulp) rugby legend:

-Trevor, you’re a member of the Norniron Conservatives now.

Indeed, it might be opined that Goody-Two –Shoes Trev left the waters a tad muddy by his answer, not to mention the ears of the nation a trifle confused if not bemused by the reply which he opted to rifle towards the sideline and which was a masterclass in equivocation:

-Well, I’m not as attached to them as I was in the past, I’ve sort of stepped aside from politics to some extent for this moment in time.

Of course, it was only to be expected that Trev opted to, erm, kick to touch for as the host with the most moola in Montrose  described him in somewhat overawed, indeed, hesitant tones:

A measure of the high esteem in which Trev is held is that he has added MBE to his CV while – lemme see – ah, yis – another contemporary Norniron Sporting Legend, one Martin O’Neill has not quite assumed that cloud capped eminence. This wee ROI-crowd pleasing MON can but add (sob) OBE to his CV.

Now, The Much Talked to and Talked About Joe has many fine qualities but no one could ever accuse The Duff of being a sporting buff. One knows this because in the past (albeit distant now) he has singularly failed to pass the litmus test of the true Irish sporting buff :

-By his pronouncing the K in Croke Park.

That would, of course, be the first K, which since the time of Setanta, has always been silent, like the Pee in Swimming Pool.

Which is down, ar ndóigh, to the Crow-like Chorus in the venue hard by the,erm, Royal Canal, which gives full throat to either the National Antrim or, in later years, the National Tantrum:

-The Soldeirs’ Song or The Shoulders’ Song.

Joe’s lack of nous when it comes to sporting news was apparent by the knock-on (small k there) he committed in his introduciton. When he failed to mention that Trevor Ringland was also a:

Trev, having, coincidentally, toured NZ with the British and Irish Lions in 1983.

It was particularly unfortunate if utterly understandable that this knock on occurred; for what else are the B and I Lions for except to function as a sorta memorable sporting metaphor for the Southern Yunes. The Lions’ tour takes place every four years and this is when Paddy Pig in the Parlour gets to get a Piggy Back on the Lion’s Back, that sorta thingy.

This sporting metaphor lends itself sweetly to the political arena, in this case Westminster. As sweetly, say, as a grubber kick does to the British and Irish boot of an unhurried Hiberno such as Conor Murray in a red-gansey.

Thus, when BOD, the sporting GOD of the secularist and non-sectarian Southern Yunery was quoted recently in (gulp) The Unionist Times that ‘once an Irish player dons a Lion’s gansey, the first thing he must do is to put his nationality to one side.’.

As if that alone was not enough for the Self Aloners.

What really piqued the anti-Peaky Caps of the Free Southern Stateen even as they rummaged through their never redundant Redmondite rhetoric to skin the Shinners alive was their failure to transfer their,erm, Lions’s share of the Nationalist (!) suffrage on to the (gasp) green benches of Westminster. The better to launch a khaki-klad kounter attack against the Haka of the High-handed Highwaymen, oops, Highwaypersons.

(Linguistic pause for a Gregorian chant: Tory is derived from Tóraí which is the Leprechaun for Highwayman).

Meanwhile, back on RTE, Trev, who has done the Hard Yards for Peace and Reconciliation, and has the T-shirts to show for them, waxed all huffy to Mister Duffy about the results of the GE in Norniron.. Trev came accoss to Joe – understandably so – as more Wrecking ball than Reconciler. Albeit, an ovoid-shaped Wrecking Ball.

Trev did not come across as a happy camper at all, at all, despite the pampered introduction of the deferential host. Not best pleased with the Election Results, was Trev. Apalled, he was, ‘an all.

Trev who has swopped his 31 caps (ah, that number again) these days for the one (hello) Halo, descriped the Sinn Fein policy as:

-Hatred of the Other.

(Trev talked to Joe and then talked some more to Joe).

Namechecked the IRA too, so he did ; though, somehow, failed to mench that bench mark of paramiliary inactivity and political tolerance the UDA when it came to the, erm, Udda side of the Political Divide, to wit, to hoo, the DUP.

-Political Violence is not acceptable to either Moderate Nationalism or Unionism.

Note the how moderating M adjective is marked absent by Trev wehre the U-word is concerned: unnecessary, superfluous, redundant, don’t you know.

At any moment, The Perkin felt that the guest was about to be requested by the hootenanny-loving host to warble a few bars of a song, such as might have been sung by the merry-making party animals of the DUP in Stormont, the other morning. Say, like:.

Sadly, due to time contrainsts, the Joe Show proved a No Show, chromatically not to mention, gramatically, and so, did not get around to frog-marching all over the Bossa Nova of the Norniron Shinners, Michelle O Neill. This time, in anyways.

Meanwhile, over in the print version of RTE, The Unionist Times, and after Ulster had said O’Neill an angsty Gerry Mor-i-ar-IT filed this three-hankie report from the Count Centre:

-There was no disguising the sadness in Seamus Mallon’s voice. “I am very, very disappointed and very sorry for good MPs who have lost their jobs,” he said of the collapse of the SDLP at Westminster.

Twenty years ago Mr Mallon was one of three SDLP MPs in the House of Commons; the other two were John Hume and Eddie McGrady. That year the party won 191,000 votes in the Westminster election. On Thursday it won 95,000.

(Which configuation, sadly, bears an uncanny resemblance to the drop in circulation to The Unionist Times).

But is it truly too late  for Seamus-who-is-not-as-famous-as-he-would-like –to-be ? Can the man who put the SL into SDLP not yet get his, erm, compeuppence and get the nod to come up from his bended knee and take his place in the ermined anti-vermined surrounds of The H of L :

The name of Trevor Ringland

Toor a loor a laddy

A goody v a baddy

It chimes with, forever, Bingland

*CR was an unrescontructed Republican from de Peoples’ Republic of Cork, boy.

View all posts by Jude Collins →
CHANGED UTTERLY, BUT FOR THE BETTER? by Donal Kennedy
On being British and neutral

3 Responses to HOOK, LIONS  and STINKERS (2) by Perkin Warbeck