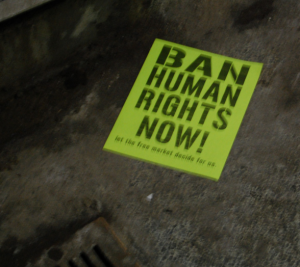 Theresa May has threatened to bring in legislation to deal with the heightened so called ‘terrorist threat’ in England in light of the recent attacks there. She has said that she will ‘rip up human rights legislation’ that stand in the way of her new laws although she has yet to spell out what those laws will be. Once again the Tory government reveals that they have never grasped what human rights legislation is all about.

Human rights law should be and has to be the bedrock of any society that calls itself democratic. It is not something that can be turned on and off when it suits the government. Human rights laws are meant to protect everyone in society from the abuses of the state and should not be within the state’s power to suspend when it suits.

Of course given the attacks in England there is a demand for action but it is precisely times like this when human rights legislation is needed most. As the outrage at the attacks grows people expect to see arrests, they expect to see people in court, in fact they want to be made feel better. But this cannot be at the expense of the most vulnerable – in this case the Muslim community. While it might make good press to have widespread arrests and detentions it makes for bad law.

All too often in the past we have seen the results of this rush for action after deaths and destruction. We have had miscarriages of justice, the Birmingham Six and Guildford Four being the best known but there were many others all as a result of the hysteria and clamour for new laws to tackle the bad guys, whoever they may be at any given moment. We have no way of knowing at this stage and it may not become clear for many years how many Muslims have been jailed on little or no evidence all to satisfy the demand for action.

There is another point as well about bringing in new laws that has to be mentioned. It is sad but true that if you give the authorities new powers they will abuse them. It just seems to be the nature of the beast: the more powers you give security forces the greater the abuse.

Look at history across the globe. In America they brought in the RICO laws to tackle organised crime and ended up using those laws against the labour unions. Here we had the Prevention of Terrorism Act designed to counteract the IRA and in the end used to persecute a whole community – the Irish in Britain. Even closer to home, many years ago a law was brought in to prevent people being compensated for something that happened in the commission of a crime. It was explained that it would prevent say an IRA man who was shot while on an operation being compensated. Most people would probably say that that was fair enough. How is the law used? It is used to prevent people with even a conviction for riotous behaviour being compensated if say they are attacked years later. Bernadette McAliskey is a case in point. Her conviction for rioting in Derry during the Battle of the Bogside was used as an excuse not to compensate her after the murderous attack on her and her husband.

It is precisely at times like this that human rights legislation has to be strengthened to prevent abuses not watered down at the whim of a government.

‘In Defence of Abstentionism: The Conscience of the Republican’   by Donal Lavery
Voting on a soft day (for adults only)

4 Responses to ‘Human rights and human wrongs’ by Eamonn MacDermott