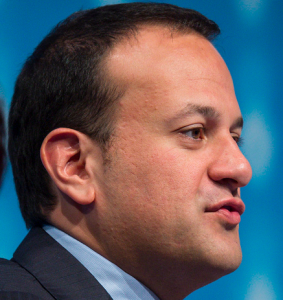 Some people will be pleased, some people will be nervous. But it’s safe to say that all Irish political parties – including the DUP, whose leader Arlene Foster is to visit Dublin today – are alert to the changes Leo Varadkar has said he will introduce as Taoiseach.

Last month, he said that he was concerned about the fact that Sinn Féin attract many of their votes from under 35-year-olds. Leo has vowed to win those voters from the Shinners, and the method he will use will be to “expose them as the party that they are.”

And what kind of party are Sinn Féin? “They are the greatest threat to our democracy”, Leo said last month.

In a way the new Taoiseach is right. When Leo says “our democracy” , he means the democracy of the twenty-six counties. Few people would dispute that Sinn Féin are at the front of those who wish to end the twenty-six county state and establish a new thirty-two-county Ireland.

But of course that’s not what Leo has in mind. He’s thinking of the fact that Sinn Féin may burst into violent insurrection at any moment. OK, maybe not the fact so much as the fantasy. Either way, it’s good to keep Sinn Féin and violent upheaval linked in the heads of the southern electorate.

Leo has declared himself the champion of “the early risers” – aka  the hard-working people who resent having to keep the benefit scroungers and doers of the double in the luxury they have grown used to. That’s another thing Leo will be good at: rooting out all those welfare chancers.

He’s also  keen, we’re told, to put clear green water between himself and Fianna Fail, which he sees as the greatest threat to…well, maybe just a threat to Fine Gael votes.

The word is that Arlene and Leo, who have met before and are said to get on well, will continue and develop that work. What unites them? Um, I’ll let you figure that one out.

I’m personally glad to see Varadkar in charge of Fine Gael, just as I’m happy to see Arlene survive as leader of the DUP. Both are strongly motivated by antipathy to Sinn Féin, both don’t mind fabricating stuff about the Shinners – threat to democracy, crocodile tendencies – and both have the capacity to send their party into a tailspin.

Failte romhat, Leo. At least the Irish people north and south will know what they’re up against in the new Taoiseach.

8 Responses to Leo steps out and names the enemy