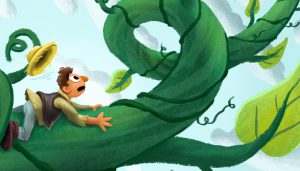 Legend has it that when Jack of Giant-Killer fame initially returned from the market after swapping their best cow for a piddling little bag of beans, his mother was not best pleased . I dare say that in those long-ago non- politically correct Norneverland days that she probably clipped him about the ears with he wooden rolling pin before he took to his bed, after throwing his little bag of legumes out of the pantry window and howling fit to burst at his knuckleheadedness..
Well ,you can see her point , can’t you .It seemed like a pitiable return for a good milker .Jack and his mother were more than surprised when the beans grew overnight into a mighty cloud-straddling bean-plant that climbed and stalked up into space. He never gave it a second thought when he began to climb up through its writhing foliage.
The Tories have done something similar within this past three weeks . I recall in debates mere days ago , the delighful tory- in -waiting- with- sharpened -knife , Amber Rudd ,squealing that there was no Magic Money Tree that Jeremy Corbyn could shake to allay austerity . She said that bank notes would not simply flutter down. Yet ,within mere weeks the seeds have been found , the garden soil tilled, the fertiliser, sun and rain applied and ” Hey presto!” …a Magic Money Tree has been grown right up to the skies, each branch dripping with lovely loot to be picked before it blows away in the Autumn winds.. Jack knew eventually, that there was always a price to be paid for dabbling in magical practices, such a growing money trees and that price was the slaying of a notorious giant who hoarded his loot up there in the clouds .Eventually he scrambled home with a few golden eggs but he decided rightly to chop down the huge magical bean -stalk before the notorious giant followed him home.
The Tories have paid off the Democratic Unionist Party for their “loyalty”with some of this magical money, to the tune of one billion pounds . Part of that was to allay the losses of some £500 million that the previous DUP First Minister Of Norneverland had lost in her crazy Loot for Soot RHI boiler scheme. This tidy mercenary backhander will have repercussions in Scotland , Wales and England who already want the Tories to start shaking that money tree for them too .They are finally aware that the DUP’s loyalty to the union has a price which impacts on them personally .They appear to be asked to continue living in austerity and poverty in this union of equals while their neighbours continue to live off the fat of the land.
As Jack found out , magic has its own price. The short-sighted , money-grabbing actions of the DUP may have done more to damage their precious union in the eyes of their neighbours than anything any republican could ever do.

View all posts by Harry McAvinchey →
THE BELFAST TELEGRAPH AND THAT POLL: SHURELY SHOME MISHTAKE?
LEO, LEOPOLD and the LIONS (2) by Perkin Warbeck

3 Responses to THE MAGIC MONEY TREE