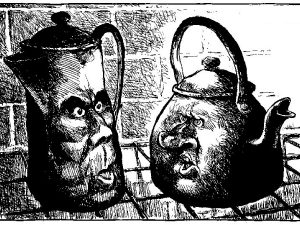 You know that the DUP are worried when Nigel Dodds is dug up to represent Arlene Foster in the leaders’ debate, last night on television. They’re obviously afraid to let the leader of the party ,Arlene , open her mouth so near an election. Every time she appears she easily puts votes into the Sinn Fein box. Apparently they are to run a repeat of the same debate on the other channel tonight. Will I watch it all over again.No …. I think I’ll catch up on “Better Call Saul “instead. It is becoming a little repetative .
It’s the same old rigmarole, in any case. We’ll have Nigel Dodds talking about the evil terrorists and comparisons will be made between ISIS and the IRA , while the entire historical record of terrorism since the inception of the Norneverland state will be swept under the carpet.There’ll be no mention of the still -current UDA who are in the process of murdering each other on the streets of today , while they cosy up to the DUP. Nor will Ulster Resistance get a look-in or the Ulster Volunteers, the Ulster Volunteer Force, the Ulster Freedom Fighters.There’ll never be any mention of context while all the hand-wringing about death goes on. No-one sane wants to see people being killed on the streets of any town or city anywhere in the world. We all want to live peaceful lives, but there has to be some understanding as to how terrorism arises.Terrorism is not simply the final act of violence.It also includes what spurs that violence to fruition. We all saw that here in the 1960swhen the terrorism was initially the rantings , ravings and demagoguery of the Reverand Ian Paisley .That verbal terrorism was aimed entirely at the Catholic / Nationalist community and was ably supported by the Unionist/Orange diaspora.

All those loyalist paramilitaries which popped up are and were drawn from the wholly Protestant community who voted and supported unionism for a hundred years since the state was imposed through threat of violence.In the recent , so-called “Troubles” these loyalist paramilitaries were responsible for around 30% of deaths and most of those targets were either simply perceived to be Catholic by religion or Nationalist by political bent.The tally could easily have been higher. it’s only a matter of numbers, but it was terrorism.Their operations involved random assassinations, mass shootings, bombings and kidnappings. They used sub machine-guns, assault rifles, pistols, grenades (including homemade bombs), incendiary bombs, booby trap bombs and car bombs. Bomb attacks were usually made without any warning. However, gun attacks were more common than bombings. Some were even murdered by knives. As can be seen by the recent ISIS attacks , even a vehicle can be used as a lethal weapon in the wrong hands. It is all terrorism for some perceived cause, even if the perpetrators are deluded by relious faith or simple hatred. Only some twenty three years ago iIn January 1994, the UDA drew up a ‘Doomsday Plan’, to be implemented should the British Army withdraw from Northern Ireland. It called for ethnic cleansing an another re-partition of the already tiny state, with the goal of making a newer Northern Ireland a wholly Protestant , if smaller affair. You might call this delude , given that an even smaller state would simply self-destruct.
Many of these terrorists have and had links to far-right and neo-Nazi groups in Britain and possibly worldwide, such as Combat 18 , the National Front and the British National Socialist Movement. Many are currently responsible for numerous racist attacks in loyalist areas.Since the 1990s 90% of racist attacks have been attributed to loyalists.This is unionism’s cutting edge and this is their philosophy.
Although these terrorist groups were all supposed to have disbanded , they are still currently active.The long list of these terrorists include the UVF(Ulster Volunteer Force), the Ulster Protestant Association, the Ulster Imperial guards, the the Ulster Protestant Volunteers, the Red Hand Commandoes, the Young Citizen Volunteers, the Ulster Defence Association, the Ulster Freedom Fighters, the Ulster Young Militants, Ulster Resistance,, the Loyalist Volunteer Force, the Young Loyalist Volunteers, the Orange Volunteers, the Red Hand Defenders, the Real Ulster Freedom Fighters, Ulster Protestant Action, Ulster Special Constabulary Association,Down Orange Welfare, Orange Volunteers, Ulster Defence Service Corps, Ulster Service Corps, ulster Defence Organisation, Ulster Constitution Defence Committee, Ulster Army Council, Ulster Loyalist Central Co -ordinating Committee, Combined Loyalist Military Command, Protestant Action Force. Where do people think these groups were spawned from and who encouraged that spawning in the first place?
You would imagine that these dolly-mixture groupings would have covered every base and would have depleted every letter of the alphabet but there is a possibility that even as I write ,another group is gathering in the back -room of a pub , someone’s parlour, or even in an Orange Hall somewhere ,to provide us all with yet another group ofalphabetical misfits ,but there is and was also seepage into the various “legal” security groupings set up by the State to initially maintain its unionist and loosely Protestant bias .Therefore the British Army and the police force were also easily infiltrated by a majority of unionists and Protestants which resulted in soldiers and policemen taking part in loyalist attacks while off-duty, giving weapons and intelligence to loyalists, not taking action against them, and hindering police investigations, all the while being paid by the same State.
All of this was to protect “their” community(ie the Protestant /Unionist community)What it meant in reality was a century of terrorism at various levels on the “other community”(ie the Catholic /Nationalist/ Republicans)
Politicians like Dodds prefer to think that “their”terrorists were somehow more legitimate and that their cause and reason to exist was more legitimate than any others, unlike those ISIS or IRA terrorists , but that is far from the case.There is much hypocrisy in Norneverland and kettles will continue to call pots black.

View all posts by Harry McAvinchey →
Michelle disappoints Malachi
Madness or just another day in the battlefield: A conflict of evidence? by Sammy McNally

6 Responses to THE POT CALLING THE KETTLE BLACK