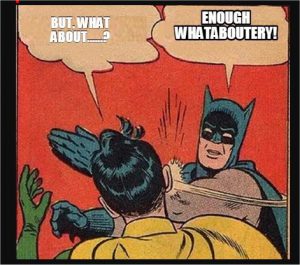 It’s never a good thing to get into a bout of whataboutery live on television when debating the current state of affairs in Norneverland.Mark Carruthers had set up a panel of party representatives currently about to joust the coming election. All the usual suspects were there ,prepared to have their say .Sinn Fein, the DUP, Alliance , UUP the Greens, SDLP and so on.; all the ones that hadn’t been invited over to Cambridge for the “Big Leaders Debate” a few nights ago….the one that Theresa May was afraid to go to. These local luminaries were being given their own little patch of sunshine as a sort of novelty prize.
it’s possible that had the Northerneverlanders also starred in that Big One in Cambridge it may have degenerated into total mayhem, like one of those double-spread pages of the Bash Street Kids that the great , late Leo Baxendale used to draw in “the Beano”. Can you imagine the chaos? The Great British public in Scotland, England and Wales would have no idea what these paddies were talking about and the questions from the audience would be endless. In the event of last night Beano version of “the View “, the DUP’s Emma Pengelly couldn’t resist pulling an old dead cat out of the Whataboutery bag.You’d think that some twenty years after the end of the Troubles every politician would have the sense to know that if you open the Whataboutery bag you will be bitten in the arse damned quickly . Emma wanted Sinn Fein, in the guise of Máirtín Ó Muilleoir ,to apologise for the IRA’s bombing of Manchester a generation ago when Norneverland was an actual war zone .Máirtín Ó Muilleoir was quick to remind Emma that her own daddy , notorious loyalist terrorist Noel Little, had been convicted of arms smuggling for Ulster Resistance and that he, Máirtín Ó Muilleoir ,previous lord mayor of belfast and a successful businessman, personally had little to do with any violence.He was pointing out the sins of the father which she appeared to have forgotten .There is the possibility , of course , that she is actually very proud of her father’s adventures and was glad that the DUP voters were reminded of her family provenance in such a timely fashion.The fact that Ulster Resistance was the brainchild of the late Ian Paisley and his successor in the DUP, Peter Robinson, both past First Ministers within this past ten years seems to have escaped her. ….even though it was apparently Peter Robinson himself who brought her into the DUP fold.
the story goes….as it often does in Norneverland that Noel Little has since “got religion”.This is the usual fall-back position for those weak-minded fellows who cannot take responsibility for their own actions. They enfold themselves in the swaddling of a n imaginary father-figure.The reality was that Mr Little was arrested in Paris in April 1989 along with two other Norneverlanders ,a South African diplomat and an American arms dealer.They were meeting in a hotel in the French city.In a later court hearing it was stated that the loyalists were trying to buy arms from the South Africans in return for stolen missile technology .A model of one missile and parts of another one had gone missing from a Territorial Army(TA) depot in Newtownards and from a Short factory in Belfast.The court was told that Little, from Markethill in Co Armagh, was the main instigator of the plot.Amazingly all three loyalists were only given suspended sentences and received fines of up to 50,000 francs for this terrorist act.You would imagine that the theft of missile technology alone would be a more serious crime in international terms.
In the previous year , a massive consignment of arms was smuggled into Norneverland from South Africa and the weapons were divided between Ulster Resistance, the UDA and the UVF.A large number of the weapons have been recovered, but the whereabouts of many of Ulster Resistance’s guns are still a mystery. The fact that there is still ongoing loyalist murder concerning the UDA and infighting on the streets in this present time-frame seems to have escaped Emma Pengelly.
Like I say , opening that Whataboutery Bag is a hiding to nowhere and when it is opened up we can all leap-frog in increments right back to the original setting-up of this curiously undemocratic state.