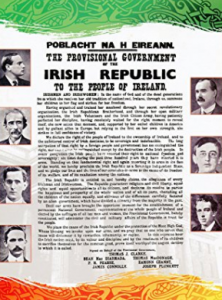 It is 99 years since President Wilson of the United States professed his ‘Fourteen Points’ speech to portray his vision for the future of international politics. Perhaps most notable for 21st century international accord was the idea that the nation would be the basis for statehood, and all would be viewed as equal in international affairs. In President Wilson’s own words to Congress: “That in determining all such questions of sovereignty the interests of the populations concerned must have equal weight with the equitable claims of the government whose title is to be determined”.

This has come to be known as the principle of self-determination, that the people of a country have final reign over who shall legislate and govern a nation.

It was in the same year, in 1918, that the Irish people exercised this right of self-determination at the ballot box. In the 1918 UK general election, Sinn Féin won 73 of 105 constituencies in Ireland with the promise of the creation of the Irish Republic as declared in Easter Week of 1916 and the creation of a new Irish legislature to govern the whole of Ireland, Dáil Éireann.

At the opening of the First Dáil in January 1919, the 1916 Proclamation was ratified within the Declaration of Independence. The 1916 Proclamation was issued by the leaders of the 1916 Easter Rising as a manifesto for governance in Ireland and the loyalty of all citizens of the island. The ensuing War of Independence and Anglo-Irish Treaty have seen Ireland partitioned since 1921 and the Wilsonian plea for self-determination has never been applied to this Irish Republic declared in 1916.

Today, Irish republicans look to the 1916 Proclamation as the benchmark by which Ireland should be governed because it lays out a programme whereby all the people of the island are considered equal citizens with undertones of socialism brought forward by James Connolly. Sinn Féin, as the mainstream voice of Irish republicans in Ireland today, outlined in their 2016 manifesto that “…that historic document [the 1916 Proclamation] is a clear statement of intent for an all-Ireland Republic built on the foundation of civil and religious liberty, social justice and equality for all citizens”.

There are some remarkable features of the 1916 Proclamation that were ahead of its time and seen Irish republicans remain progressive over the past 100 years. It was the first constitution anywhere in the world to acknowledge the female franchise. It was also Constance Markievicz who was the first female elected to the House of Commons in the UK under the banner of Irish republicanism.

This progressivism has continued in Irish republicanism to the present day, with Irish republicans a part of the civil rights demonstrations in the north in the 1960s which were oppressed by the police and army. Today, Sinn Féin push for the equality of the LGBT community in Ireland and their right to marriage equality which is still blocked in the north.

When history and Sinn Féin are considered together too many people dismiss Sinn Féin and Irish republicanism due to what is perceived as an unjust armed struggle. Even today, 19 years on from the Good Friday Agreement and over 10 years since the complete decommissioning of the Provisional IRA, Sinn Féin are portrayed in this negative light as if we are somehow a threat to national security. It is Sinn Féin who have been most enthusiastic in rolling out the provisions of the Peace Process and reaching across the political divide in order to reconcile with the past. What contemporary attitudes to Sinn Féin in some quarters suggest is either outright ignorance, or a fear from the establishment that what Sinn Féin and Irish republicanism offer is a threat to their agenda. Irish republicanism has actually been at the forefront of promoting progressive politics for quite some time, but has never got the time or recognition a true progressive political movement deserves in the media or amongst the population.

Any republican movement by its very nature and being is progressive. The very term ‘Republic’ itself is a Latin translation of ‘public affair’, in the sense that governance is a public matter and political offices aren’t inherited. It was the American and French revolutions which initially gave republicanism its embedding as a progressive political force. It was the success of these revolutions that inspired the earliest Irish republicans like Wolfe Tone to establish a Republic in Ireland, independent from the British state and monarchy. Instead of allowing the continuity of governance in the hands of an unelected and undesired aristocracy, the existence of a republic allows any citizen to aspire for public office and prevents the abuse of power via election cycles and public accountability.

It was Abraham Lincoln at his Gettysburg address who epitomised this perfectly when he professed “government of the people, by the people, for the people”. Five times in Ireland’s history in 1798, 1803, 1848, 1897 and in 1916 have the values and ethos of republican governance been fought for via revolution in Ireland.

Progressive republican movements can be undermined by social conservatism, right-wing capitalism and extremist nationalism. In Ireland, republican movements have historically been left-wing and accommodating of all social classes and religious groups in Ireland in the hope of creating united fronts. Thomas Davis, one of the Young Irelanders from the 1840s, promoted the idea that all sections of the Irish population could be Irish via a willingness to be part of the nation. Wolfe Tone was also a Protestant, as were other notable Irish republicans such as Erskine Childers and Ernest Blythe. Irish republicans today continue to emphasise this message, that people who identify as British from the north of Ireland can become a part of the Irish nation. Parity of esteem in the north exists to accommodate for people who identify as Irish or British, which means the door to the Irish nation is still open, along the lines of willingness, as opposed to blood, as expressed by Davis in the 1840s.

Irish republicanism today is also synonymous with democratic socialism in that mainstream Irish republican movements have been socialist republican movements. Today Sinn Féin align themselves at the European level with the European United Left and Nordic Green Left, alongside parties like the ruling Syriza Party in Greece. Sinn Féin has appeared at the front of anti-austerity campaigns in Ireland, north and south, against British- and European-imposed measures harmful to the people of Ireland.

Irish republicans in Sinn Féin accept that for Ireland’s self-determination to be exercised, a majority of people in the north must consent to the north becoming part of a united Ireland. The principle of consent is being abused and ignored by Brexiteers today who wish to pull the north out of the EU, despite 56% of the north voting to Remain. Sinn Féin continue to push for Special Designated Status in the EU because having an internationalist outlook and access to the world’s largest common market is in the interests of the island, because Brexit would have catastrophic consequences on cross-border trade and create further problems beyond what is already an inefficient way of running a small island with two alternative state bureaucracies, differing tax systems and public services each side of the border.

Sinn Féin and Irish republicans strive for what progressives strive for globally, which is the redistribution of wealth and true governance for the people, not governments fulfilling narrow agendas in the interests of the few. When socialism is taken alongside Irish republicanism and the extension of civil rights to all the people of Ireland to protect minorities from persecution or discrimination, what is there is a genuine 21st century progressive political movement.

Sinn Féin and Irish republicans seek to accommodate and protect British culture in the north because it cannot be expected to just disappear, protect the LGBT community, protect immigrants who we have the privilege of having because they have actively chosen Ireland to build their new lives, and show solidarity with the Palestinian, Basque and other peoples worldwide who are denied the basic dignity of statehood.

In Ireland, we must persuade northern unionists that a united Ireland is in their interests because their culture and way of life can be protected, alongside their religious freedom. What Irish republicans want is a new and agreed Ireland where beyond mere co-existence, the Irish will work with one another to make the island a welcome and free home for all who inhabit it. All we ask in return is the recognition by the free press that Irish republicanism, a true 21st century progressive political movement, is treated fairly like other mainstream political movements, and not attacked and stigmatised at every opportunity.