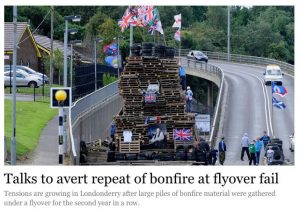 (I’ve just learnt from a Man Who Knows that the above picture is from last year. So maybe the dumber have seen the light this year – in which case read no further and go peruse Malachi O’Doherty’s Unauthoristed Biography of Gerry Adams…)

There can only be one thing stupider than a unionist bonfire bedecked with Irish tricolours, posters of republican candidates and mock-coffins of republican leaders, and that’s nationalist/republican bonfires bedecked with Union flags and and sectarian images. They’re of course equal in venom and blind hatred; but the nationalist/republican bonfires are stupider because they sink into the mire with their opposition and hold themselves up to the same kind of contempt that Eleventh Night bonfires elicit.

You could be kind and say it’s a case of tit-for-tat, they’re not doing anything the other lot didn’t do first. But tit-for-tat  never got anyone anywhere, except that it offers a visceral and fleeting satisfaction – Take that, then!  Childish and dunderheaded.

There is one ominous respect in which the nationalist/republican tat is less disgusting and that’s the people behind them. You can talk for a month if you wish, but no one will persuade me that the many Eleventh Night bonfires aren’t built with the complicit consent or even active support of  unionist paramilitary groups like the UDA and the UVF.These groups have never decommissioned, and things don’t happen in their area without their say-so.  The same is only partly true in nationalist-republican areas. Those who build the bonfires there almost certainly have the backing of violent dissident republicans. They certainly don’t have the backing of mainstream republicans. So if we want some small balm for our souls as we gaze on pictures of nationalist/republican bonfires built in profoundly stupid places, it’s this:  the majority of the nationalist/republican population, and its former paramilitary groups, don’t want these damned flame-belchers. The majority of the unionist/loyalist population may not want bonfires either, but if they don’t say anything,  how will anyone know their distaste? It’s beyond time that they did  what republican politicians and ex-paramilitaries have done: open their mouths and tell the bonfire knuckle-draggers to stop and to stop now.

But we are, as they say, where we are. So well done, nationalist/republican pyromaniacs:  you’ve managed to drag your community down to the same sad level as the Eleventh Night nutters.

View all posts by Jude Collins →
‘My Mother has Gone Away’ by Randall Stephen Hall ©.
ABSTENTION FROM WESTMINSTER A PROVEN WINNER by Donal Kennedy

21 Responses to Let’s see: how can we be even dumber than than themuns?