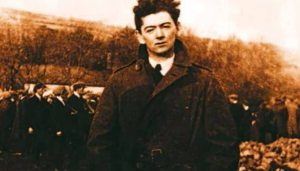 What is it about Irish people – or more accurately, some Irish politicians – that they are afraid to salute those men and women who fought to establish the present southern state?

The main strategy employed to navigate the 1916 Easter Rising commemoration was to twin it with the Battle of the Somme in the same year. The twinning ran like this: “Irishmen fought and died in the Easter Rising. Irishmen fought and died in the Battle of the Somme. So if we are to embrace all the children of the nation, we must honour the Irishmen and women who fought against the British army, and equally those who fought in the British army.”

This is passed off as the ability to see the big picture, to realize that our history is complicated and belongs to no one political party. Therefore we should extend equal homage to all who died.

Which is what I would call jesutical crap, except that I don’t to offend the Jesuits. One group – those who fought in the Easter Rising – sowed the seeds that led to independence for much of the country; the other group fought in an imperial war, hundreds of miles from home, and gave their lives for …what? Mother Britain? To save the world from German tyranny? Uh-uh. They gave their lives because they were hoodwinked by Redmond and others into believing they were doing something noble. In fact they were doing something bloody, obscene and futile.

And now Micheal Martin is peering ahead at the 1919-22 period, the Black and Tan War/The War of Independence. We’re being warned by the Fianna Fail leader that this period doesn’t belong to any one party, that it’s a very complicated business with many sides to it, that we must approach it in a cautious, “evidence-based” way.

Quite right, Micheal. But please don’t try smothering the period in on-the-one-hand-on-the-other-hands. Yes, 1919-22 fits into a wider historical panorama. But that doesn’t mean that we seek out flaws, warts, carbuncles, cancers on the face of those who fought for Irish freedom then. Can you imagine the French celebrating Bastille Day by producing balancing evidence of how kind Marie Antoinette was to her ladies-in-waiting? Or how awful it must have been to be one of the royal family guillotined? Do you think the Fourth of July is trimmed and modified by emphaising how courageous the British red-coats were in the face of George Washington’s rebels? How they all deserve our respect for what happened back then?

It’s not history that’s driving Micheal and his mates to mute as much as possible the courage and achievement of men like Tom Barry and Dan Breen. It’s fear that it might mean the Irish people will see through the fraud of what was claimed as a Free State and then a Republic, and the shameful way parties like his own hid their ‘The Republican Party’ tag for some forty or fifty years.

The Irish people aren’t quite that stupid, Micheal. And all your ifs and buts and on-the-other-hands won’t bamboozle them. Great commitment and great courage and great daring pushed the British administration and its army out of most of Ireland during that time. Enough with the historical head-of-pin dancing.

5 Responses to Micheal Martin and how to blur history