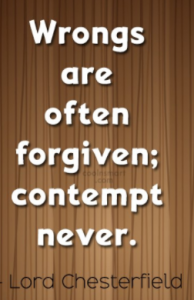 I read an article a couple of weeks ago about President Donald Trump. Predictably, it didn’t make for a cheering read, but the writer’s central point was an important one: people can get used to the most appalling things and start thinking of them as normal.

* A President who engages in near-arm-wrestling with other heads-of-state, to establish his macho dominance over them.

* A video clip which appears to show the President leaping on a reporter and wrestling him to the ground.

* A recording of the President-to-be boasting of grabbing women “by the pussy”.

* The President-to-be leading his audience in chants of “Lock her up!” when the name of Hillary Clinton is mentioned.

* President-to-be Trump’s promise to build a wall between the US and Mexico and make Mexico pay for it.

* President-to-be Trump’s claim that he could go out and shoot someone in the street and his supporters would still vote for him.

I’m sure you can add to this list of vulgarity and crassness. The point the writer emphasized is that Americans and the world have become so used to this kind of behaviour, to the point where we no longer feel shock or outrage. It’s the new normal. Only in America, eh?

Well, maybe. Or maybe not. There are things which happen here which would be considered outrageous anywhere else. We’ve learned to accept them as the norm.

* British troops gun down thirteen people in broad daylight and the government lies about what happened. After more than thirty years, the Prime Minister apologises. There is no promise of justice for the victims or even putting on trial those responsible.

* Hundreds of innocent people are killed by collusion between British forces and loyalist killers. The actions are documented in a book. No charges are brought.

* A First Minister is involved in a financial scandal that promises to cost the public purse up to half a billion. The First Minister refuses to step aside while the matter is investigated.

* Every year, an anti-Catholic organization conducts several thousand marches to remind their Catholic/nationalist/republican neighbours who defeated who at the Battle of the Boyne. The organization congratulates itself when there are no clashes with the community they are insulting.

* The BBC constructs scaffolding, to better show the bands marching on the highly-partisan Twelfth parade.

* Twenty years ago, an Agreement signed up to by the major parties of the time, along with the Irish and British government, promised a Bill of Rights. There is no sign that this will ever be implemented.

* The mainstream media, north and south, adopt a consistently anti-republican stance. Those who complain are dismissed mockingly as MOPES (‘Most Oppressed People Ever’)

Again, you could probably add your own favourites. But my point is the same as the journalist who commented on the Trump regime: our sense of morality and justice gets coarsened by frequent assault, until we accept contempt as the norm. When will our politicians, regardless of party, look hard and long at these appalling matters and say “Enough. This is not right”.

View all posts by Jude Collins →
‘Robert Hamill Was Walking Home’ by Joe McVeigh
‘Myers puts the Kibosh on it ! or, On desperately Seeking an Alternative roll of T-paper to wipe my’ers with”. by Perkin Warbeck