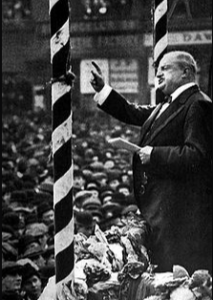 I’ve written before on John Redmond’s 1913 St Patrick Day’s speech (JOHN REDMOND’S AMBITION FOR IRELAND) to a British audience and to an interview he had with C.P.Scott of the Manchester Guardian that same year. The August Destiny he envisaged for Irishmen was as storm troopers for the British Empire, and for Irishwomen everlasting disenfranchisement whilst they kept the home fires burning and demurely sewed socks for soldiers. I quoted his London speech from Roger Casement’s authenticated writings on Britain’s War. against German grouped under the titles THE CRIME AGAINST EUROPE and THE CRIME AGAINST IRELAND.I quoted the Political Diaries of C.P. Scott showing that Redmond expected Irish women not to engage in public life, and to find fulfilment in the roles free Athenians saw fit for idiots.I was shocked to discover his low ambitions, for had not he and his parity not shared platforms with unrepentant Fenians such as those who smashed the prison van in Manchester and the dynamitard O’Donovan Rossa ,when collecting funds in the United States. Had not Redmond and his fellow  MPs made sure to be seen at commemorations of the 1798  Rising and the Centenary of Emmet’s Rising of 1803.
I thought that age had weakened and confused a once upstanding and principled patriot  But    I was mistaken.                               I   recently was perusing “GREAT IRISH SPEECHES” an anthology byRichard  Aldous with a Foreword by Colm Toibin. All of the speeches are of historic interest and some of them are truly great. Others, such as John A Costello’s 1934 Dáil defence of the Blue-shirts,  are an embarrassment, coming as it did from a  learned sophisticated jurist.
But the young John Redmond in the Home Rule Debates in 1886  was already  an imperialist  to the marrow of his  bones- “Speaking as a Nationalist, I do not regard as entirely palatable that forever and a day Ireland’s voice should be excluded from the councils of an empire which the genius and valour of her sons have done so much to build up and of which she is to remain.”.
On a visit to Cork with my father in 1957 we walked along the banks of the Lee by Blackrock Castle and he told me that I’m 1914 he had heard Willie Redmond, brother of John, speaking in support of Home Rule. Willie Redmond, who was killed serving as a Major in the British Army some three years later was an MP. He spoke – “From an Imperial Point of View”, which he obviously shared, and my 15 year old father recalled the words of Henry Grattan – “Perish the Empire, Live. Ireland.” Imperial Home Rule perished with Major Willie Redmond, as his party’s chosen standard bearer in his late constituency of East Clare was trounced by Eamon de Valera, on a separatist Republican ticket, and it was buried by a landslide in 1918 in the General Election. Professor Fitzpatrick of Trinity College Dublin and his ludicrous cronies would deny these truths. Perhaps Professor Eunan O’Halpin could borrow a JCB to look for the skeleton of that buried political abortion while Eoin Harris, Kevin Myers and Ruth Dudley Edwards spread muck all over the historical record.