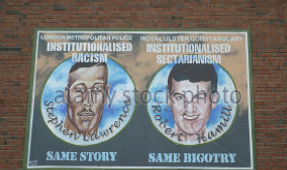 Robert Hamill was walking home from St Patrick’s Hall in Portadown on the night of April 27th 1997, along with three friends. When they arrived in the centre of Portadown he and one of his friends were attacked by a crowd of about 30 loyalists. As they kicked and punched Robert, some of them were shouting:”Kill him, Kill him!” and “Die, you Fenian bastards!” An RUC land rover was parked nearby. Inside the land rover were four RUC officers. None of them intervened. It emerged later that some of the RUC people in the land rover were personal friends of some of the loyalists involved in the beating.

Robert Hamill was seriously injured that night and taken to hospital. He was on a life support for ten days. He died of his injuries on 8th May 1997.None of the loyalists was arrested that night. They had time to destroy forensic evidence. Seven different statements were released by the RUC over the following days giving conflicting accounts of what happened. On the 28th April, 1997, the day after the attack, five loyalists from Portadown were arrested. On 12th May a sixth loyalist was arrested. After being in custody for five months five of the six men were released. The judge sympathised with them ‘on their ordeal’. Some time later the sixth man was released.

On 24th November 1997, at the request of the family solicitor, Rosemary Nelson, I accompanied members of the Hamill family to meet the then Secretary of State, Mo Mowlam. Robert Hamill’s sister, Diane, presented Mo Mowlam with a petition with 20,000 signatures calling on her and the British government to set up an Independent Public Inquiry into the circumstances of Robert’s murder. It also called for the suspension of the four RUC officers who watched as Robert and his friends were attacked by the loyalist gang. Mo Mowlam expressed her sympathy but said that her hands were tied regarding setting up a Public Inquiry. She did not seem to be well informed about the case and when I told her what the judge had said when he released the suspects she said she had not heard that before. A senior civil servant, Mr Steele, accompanied her at the meeting and told us that the Independent Commission for Police Complaints(ICPC) was already investigating and we should await the outcome of the findings and we should have no reservations about their independence. We told Mo Mowlam that we had no confidence in such an investigation. Time proved us right.

Clearly, there was little chance of the Hamill family getting justice when the RUC was in charge of the investigation and the judiciary was sympathetic to those loyalists who were charged. When Diane Hamill informed Mo Mowlam that the four RUC officers in the land rover that night  had taken “sick leave” and were seeking compensation for trauma, Mo Mowlam said she was not aware of that. She said that she would make inquiries and that we would hear from her office in a short time with answers to our concerns. We never heard anything. It was clear to us that the securocrats were running the show.

Members of the Hamill family along with their solicitor, Rosemary Nelson, continued to campaign for justice for Robert. I joined them and many others in a public protest outside Belfast City Hall on the first anniversary of his murder. Members of the family were continually subjected to sectarian abuse by loyalists. Rosemary Nelson was killed on 15th March 1999, when a booby trap bomb was placed under her car at her home in Lurgan. There is strong suspicion of collusion between the RUC and loyalists in her murder. The RUC had, on many occasions, while interviewing nationalists, said that she was a target. The Loyalists printed vicious leaflets about her accusing her of being a bomb-maker.

During 1997 there were a number of other Catholics attacked and killed. This coincided with the emergence of the Loyalist Volunteer Force (LVF) led by Billy Wright and Mark Fulton.  This group is thought to have been responsible for the killing of GAA man, Sean Brown, Bernadette Martin and her boyfriend, James Morgan, Gerry Devlin and Seamus Dillon. These were all killed by loyalists in 1997.

Unionist politicians who preached bigotry over many years (“I would not have a Catholic about my place”) must bear a heavy responsibility for the hatred shown towards Catholics generally in this part of Ireland. Robert Hamill was an innocent man walking home with friends from a night out in St Patrick’s Hall. He was set upon by the Billy boys and beaten to death. His only crime was that he was a Catholic. This is the kind of society that the British created when they decided to set up an Orange six county statelet.  They too bear a great responsibility for the visceral hatred of Catholics by loyalists who support this artificially constructed British colony.

38 Responses to ‘Robert Hamill Was Walking Home’ by Joe McVeigh