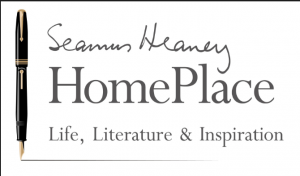 Last week I visited the Seamus Heaney centre, HomePlace, in Bellaghy Co Derry. I came away from this wonderful exhibition thinking what a uniquely gifted man this man was – a man who grew up on a nearby farm, the oldest of nine children, whose father Patrick, a quiet man, was a cattle dealer and his Mother Margaret Kate was a home-maker with an outgoing personality. His father’s sister, Mary Heaney, lived with them when he was growing up and he wrote a poem about her baking bread. The memories of these people in his early life feature often in his poetry.

He wrote many poems about his home place, about the tragedies in his life -especially when his young brother Christopher, aged four years, was knocked down by a car and died while Seamus was a boarder in St Columb’s college in Derry.

I sat all morning in the college sick bay
Counting bells knelling classes to a close.
At two o’clock our neighbours drove me home.

In the porch I met my father crying–
He had always taken funerals in his stride–
And Big Jim Evans saying it was a hard blow.

The baby cooed and laughed and rocked the pram
When I came in, and I was embarrassed
By old men standing up to shake my hand

And tell me they were “sorry for my trouble,”
Whispers informed strangers I was the eldest,
Away at school, as my mother held my hand

In hers and coughed out angry tearless sighs.
At ten o’clock the ambulance arrived
With the corpse, stanched and bandaged by the nurses.

Next morning I went up into the room. Snowdrops
And candles soothed the bedside; I saw him
For the first time in six weeks. Paler now,

Wearing a poppy bruise on his left temple,
He lay in the four foot box as in his cot.
No gaudy scars, the bumper knocked him clear.

A four foot box, a foot for every year.

Seamus wrote about his relatives and neighbours who influenced him as a boy growing up near Bellaghy.  Later he wrote poetically about his wife, Marie, and children and grandchildren. He wrote about Creation, the sorrows of the Troubles and the connection with our distant past and the lessons of the great writings of the past. There were many literary influences-Patrrick Kavanagh and the Jesuit Gerard Manley Hopkins to name only two.

There is much of interest in the exhibition and it would take longer than a day to take it all in. But I came away after this visit with a greater appreciation of the influence of his parents and home place on his imagination. In a long poem ‘Clearances’ he recalls his mother preparing the Sunday dinner:

When all the others were away at Mass
I was all hers as we peeled potatoes.
They broke the silence, let fall one by one
Like solder weeping off the soldering iron:
Cold comforts set between us, things to share
Gleaming in a bucket of clean water.
And again let fall. Little pleasant splashes
From each other’s work would bring us to our senses.

So while the parish priest at her bedside
Went hammer and tongs at the prayers for the dying
And some were responding and some crying
I remembered her head bent towards my head,
Her breath in mine, our fluent dipping knives–
Never closer the whole rest of our lives.

Seamus had the gift of putting into words and images what many of us experienced growing up in the north. He did not get too involved in the politics of the local situation and he has written to explain his reasons for that decision.

Seamus was, above all, a generous man, generous with his time, with his talents and generous in sharing his soul with the rest of us. I only ever met him once in New York after a poetry reading and it was a very pleasant experience. I went to hear him speak at the Yeats Summer School in Sligo and I came away enlightened and more fascinated by this rare down to earth human being who happened to be a poet. He was always a teacher in many respects-but he was also like a farmer. On a one to one, he was really humble, no airs or graces, nothing to indicate that his was a world renowned poet.

We should be proud of this gifted writer from county Derry who has received many awards and won the Nobel Prize for Literature in 1995.

Seamus is recognised all over the world and his poems are translated into many different languages. I hope to return to Bellaghy to take in more of Seamus Heaney’s life and poetry.

View all posts by Jude Collins →
City Deals and the SDLP by Kieran Cairns
THE TIMES OF LONDON – A STICKLER FOR DETAILS? by Donal Kennedy