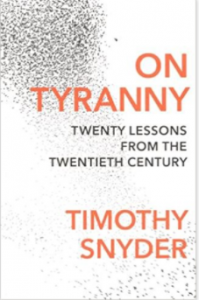 “Those who advocated Brexit, the departure of the United Kingdom from the European Union, imagined a British nation-state, though such a thing never existed. There was a British Empire, and there was Britain as a member of the European Union. The move to separate from the EU is not a step backward unto firm ground, but a leap into the unknown. Eerily, when judges said a parliamentary vote was required for Brexit, a British tabloid called them “enemies of the people”- a Stalinist term from the era of the show trials of the 1930s.”

This is a quote from a new book by Timothy Snyder, Professor of History at Yale, entitled, On Tyranny-Twenty Lessons from the Twentieth Century. The book points to lessons we should learn from history.

According to Snyder, history does not repeat but it does instruct. The Founding Fathers in the USA considered the decline of the early republics and the rise of empire going back to early history of Rome and Greece. Aristotle warned that inequality brought instability and Plato warned that demagogues exploited free speech to make themselves tyrants. How often in history have we seen this –and yet lessons were not learned until it was too late. The Founding fathers founded the American republic on law and a system of checks and balances to avoid the evil of tyranny. Yet there were abuses and discrimination against the African Americans and against women.

“We should have learned from ancient democracies but clearly we did not and we had modern democracies slide into tyranny.” History should warn us how easy it is for societies to break and democracies to fall.

Fascism and communism were responses to globalisation. People had become disillusioned and fearful and fell for demagogues who promised the people a new beginning and a better deal which they did not deliver and could not deliver. Their promises were based on a falsehood -the falsehood that Britain is now and always has been and always will be a nation state.

The Irish people as a whole will suffer because of the right wing Tory Brexit adventure into the unknown. There was no thought and no care for the consequences of going down this road for Ireland, for the Belfast Agreement and for the peace process.

The peace process has now been damaged by Brexit and by the British government’s insistence that we here in this part of Ireland must accept the result of the referendum. We are, we are told, part of the United Kingdom and the results of the referendum in the north does not matter. The reality is that since the Good Friday Agreement being part of the United Kingdom is problematic and conditional. The north should have received a special designated status to recognise its unique position and the importance of consolidating the peace. The Belfast Agreement has been strongly supported by the EU.

Timothy Snyder warns that we must always be on our guard for we are no wiser than those who saw democracy descend into fascism, Nazism or Communism. We should learn the lessons of history. Brexit should never be allowed to undermine the great progress towards peace, justice and equality made here in recent years. Brexit must be opposed not only because of the threat to the peace process. It is a form of tyranny based on falsehood.