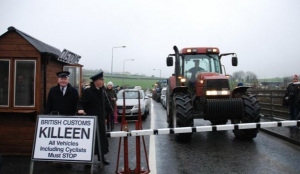 For a short period in 1970, I lived on one side of the border and worked on the other. Each weekday morning I’d drive in my unreliable car from outside the small Donegal village of Muff to St Jospeh’s secondary school in Derry’s Creggan. It should have been a pleasant drive but it rarely was: there was an inevitable British Army checkpoint on the northern side of the border asking me who I was, where was I going, where was my driving licence or other proof of identification. Looking back, the words of Paul McCartney’s yet-to-be-written (and banned) song Give Ireland Back to the Irish seem apposite:

‘Tell me how would you like it/If on your way to work/You were stopped by Irish soldiers/Would you lie down and do nothing/Would you give in or go berserk?’

Now we face a similar situation with Brexit. In a June article in the Irish Times, Marie Lindsay, a school principal who lives in Muff and is a school principal in Derry, speaks of her fears that Brexit will take us back to those days of the 1970s.

Her son Gerard works as a plumber on both sides of the border. The implications for his customer base are frightening. A Donegal chef voices his concerns: ““There is a lot of worry amongst border traders who are producers in food about the freedom of movement of foods, ingredients and produce in general.”

It’s the real lives of people like this which should be examined when we discuss Brexit, not vague talk of a ‘seamless border’ or a ‘frictionless border’. People like Marie Lindsay and her son and the chef – these are the people whose lives and livelihood are likely to be disrupted or even destroyed.

And we should be clear about one thing: this is Britain’s doing. The south of Ireland didn’t ask for this plunge into the past. The majority of the people of the north of Ireland didn’t ask for it either. But because the DUP is happy to suck up to the Tories and be unbending Brexiteers, all of the people of Ireland, north and south, will suffer to varying degrees. Some will have their livelihood destroyed. Others will suffer the daily irritant of being checked as to the validity of their movements in their own country.

What a pity that all the people of the south of Ireland and the majority of the people in the north can’t come together and speak with one voice, telling the British government “You want to inflict economic wounds on yourself? Fine, go ahead. But don’t expect Irish people to join you in your irrational behaviour.”

And beyond that, in an even darker place, there will be people who will say “An English parliament is going to divide Ireland and the Irish people? We’re going to be made explain ourselves on a daily basis as we live with decisions made in another country?” These people, you can be sure, will not lie down and do nothing.

Brexit will mean the dismemberment of the Good Friday Agreement.

94 Responses to Brexit: the death of the GFA