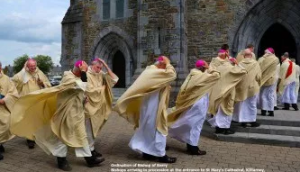 Recent reports in the media that the British government wanted to have a direct say in who was to succeed Cardinal Tomás Ó Fiaich in Ara Coeli did not come as a great surprise. It was clear from the English Press that they were none too happy with Tomás – because Tomás was too pro-Irish and not pro-British enough. In fact, Tomás had no time whatsoever for British imperialism and its destructive influence in our native country. He had not much regard for Mrs Thatcher. He was not an IRA supporter but he wanted a free and independent Ireland.  Because he spoke Irish and came from Crossmaglen and highlighted the cause of republican prisoners he was portrayed in the British gutter press, as an IRA sympathiser. Clearly, the Brits wanted someone more biddable in Armagh, someone who would carry out their wishes. Lo and behold none other than Cahal B. Daly from Loughgiel in County Antrim was appointed to Armagh in November 1990. Cahal had proved his worth to the Brits when he was appointed to Down and Connor in 1982 to succeed Bishop William Philbin, a native of Roscommon. Cahal Daly did not disappoint in Armagh. He was appointed a Cardinal by the Vatican in 1991 which gave him some influence and authority in Rome. He was not going to challenge British policy in Ireland. He was a most agreeable sort of a man who cooperated in every way with the Brits especially in their dirty propaganda war. I remember seeing a front page picture of Patrick Mayhew at his 80th birthday on the front of the Belfast Catholic news. They certainly appreciated his support.

The recent disclosure throws some more interesting light on British policy and attitudes to Ireland –not just in the past but today. Their main aim has always been to control the people and resources of this island. That has been the aim of British imperialism for centuries since they first confiscated the land and planted English and Scottish families here and introduced harsh measures to keep the natives in subjection.

With the establishment of the seminary in Maynooth in 1795 and the Act of Union in 1899 which was supported by the Catholic Hierarchy the Brits were able to consolidate their hold on the whole island of Ireland. That lasted for over 100 years until the outbreak of the 1916 Rising and the Tan war. With partition and the counter revolution they continued to exercise complete control in the six counties and partial control in the 26 counties. God only knows how many bishops the Brits appointed during those years. They (the Irish bishops) were the greatest allies of the Brits along with the Catholic ascendancy and middling class.

With Brexit the Brits see another way of strengthening their control on this part of Ireland. Come to think of it, our diocese is now awaiting the appointment of a bishop. Wonder who that might be?