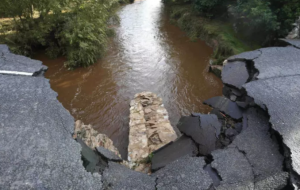 OK – full attention, please. What part of our little North-East Nest (NEN) was worst hit by the recent wet weather? Well done – what’s referred to as ‘The North-West’. The pictures of damage in places like Eglinton, Plumbridge and Drumahoe are appalling. If you’ve ever suffered even the mildest of flooding in your home, you’ll know that the mess and stink goes on for days, weeks, even months after. If you’re running a business, you may never recover.

There now have been calls for major investment in infrastructure west of the Bann. Do tell me:  when have I heard that before? All my life, actually. It was no accident that the civil rights movement drew its leader from Derry, that Derry city had the most brazenly-gerrymandered council in the stateen, that the formidable Martin McGuinness came from that city.

For much of my working life with the University of Ulster (and before that the Ulster Polytechnic), I travelled at least once a week to out-centres in places like Derry, Strabane, Enniskillen. It was gruelling, driving those roads, often late at night. Still, you accepted it the way you might accept bad weather. But think about it: the two major population centres in the state – Belfast and Derry – joined by a road that twists and turns like a a boa constrictor having a convulsion. Why was that? For the same reason that the New University of Ulster was sited in Coleraine not Derry: too many taigs in the latter. Coleraine was never suitable as a university location, and over the decades it’s been propped up by having courses shifted from Belfast to Coleraine. A colleague of mine at Jordanstown, in the early days of the merger between the Ulster Polytechnic outside Belfast and the New University of Ulster (NUU), was asked how he found the merger experience. “It is” he replied “like being strapped to a corpse”.

In some respects, Derry is a much-improved city than it was back then. But if half the funding that’s been ploughed into the Titanic Quarter had been allocated to Derry and other areas west of the Bann, much of the recent flood damage could have been avoided.

Final thought. Have you noticed how ‘Ulster’ features so frequently in titles like the Ulster Polytechnic, the New University of Ulster, the University of Ulster, Ulster University, Ulster Farmers’ Union, BBC Radio Ulster? But of course none of these institutions cater for one third of the province of Ulster. And hand in hand with this geographical over-reach, we have much talk of ‘the North-West’, which a moment’s glance at a map will tell you encompasses Derry and Donegal. You could almost hear the strain in the TV reporters’ voices as they were forced to allow that yes, there was a bit of flooding across the border as well, in places like the village of Muff.

Deliberate underinvestment and deceptive nomenclature: sure where else would you get it only in our wee NEN?

39 Responses to Destruction and discrimination west of the Bann