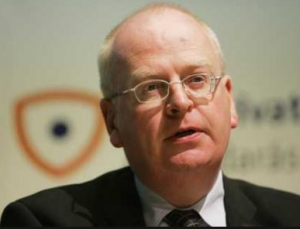 I read Michael McDowell’s article in this week’s Sunday Business Post with interest. His great fear is that FF will go into government with SF in the south after the next election. According to McDowell SF are not a ‘normal democratic’ party. According to McDowell they are run by an army. People are forced to vote SF by people with guns. McDowell, like others writing in the media, lives in the Dublin 4 fantasy world. The truth is, as he says himself, Michael doesn’t like left wing politics. Sinn Fein in government would make too many demands on the rich in the south to share some of their wealth and alleviate the poverty that is growing there every day.

Michael McDowell was once a TD in Leinster House for the far right wing anti-republican Progressive Democrats founded by Des O’Malley and Co. They were in government with FF for a time when they ripped off the country. McDowell is a former Attorney General. He puts himself forward in the media as an expert on ‘de Nort’! He is surely an expert in anti-republican propaganda. He is the typical example of what I call ‘the free state mentality’. I have come to realise that the Free Statementality takes a very negative approach to any talk of Irish reunification. It is the mirror of the Unionist state of mind in the north. It is summed up in the old slogan ‘what we have we hold’. We’re all right Jack, your plight is no concern of ours. We do not want anything to do with ‘de nort’.

The Free State attitude became evident in the early days of the civil rights movement when the Dublin political establishment, under Jack Lynch, did not know what to do. It became clearer as the conflict unfolded and years of frustration and repression in the six counties led to violence. The Free State mentality became obvious over the years of repression in the north when the British introduced their pseudo gangs, shoot to kill, Diplock courts, censorship. They cooperated with the British.

The Dublin government was forced by human rights activists to take up the torture of prisoners during Internment in 1971. They brought the Westminster government to the European court and the British very found guilty of cruel and degrading treatment but were not found guilty of torture and were not to my knowledge punished in any way.

After that the Dublin government took a clear decision that the daily repression of Irish citizens in the six northeast counties was of no concern of theirs. They also decided to cooperate fully with the British government in harassing and rounding up republicans. British Intelligence in the 26 counties made sure to keep the Dublinpolitical establishment subservient to their plans. The southern political establishment, comprising Fine Gael, Labour and Fianna Fail, had their own little banana republic to look after and those pesky nationalists in the six counties were not going to upset their cosy world. That is still the predominant attitude, as exemplified by Michael McDowell and media hacks who resist change in the constitutional situation in Ireland. These right wing fascists will always oppose any move to include Sinn Fein in government in the south.

McDowell has nothing to contribute to the creating of a new Ireland. His kind of negative politics are history. The people will decide.

View all posts by Jude Collins →
Brexit: the death of the GFA
MICHAEL MCDOWELL – TOMORROW’S GURU? by Donal Kennedy