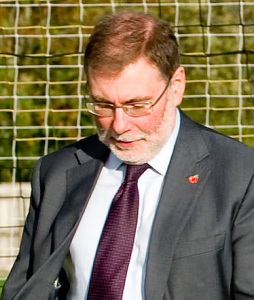 I’ve just ended a (fairly limited) contribution to this morning’s Nolan radio show. The question under discussion was, predictably, the vacuum at Stormont and the need to get an Assembly and an Executive in place.

My good friend Nelson McCausland of the DUP was on and he made it abundantly clear to Stephen Nolan’s stand-in Vinny Hurrel that the whole problem was Sinn Féin. Everyone else wanted to go back in except the Shinners; therefore keep the pay of everyone else, cut the pay of the Shinners and the show would soon  be back on the road.

When Vinny spoke of the Sinn Féinn insistence on delivering the promised Acht na Gaeilge/Irish Language Act, Nelson said we couldn’t have these red lines from one party, an Irish Language Act would give cultural preference if not supremacy to one section of the community, and wasn’t it time that Gerry Adams trimmed that beard of his? OK, he didn’t say that last bit but he did mention quite frequently the Sinn Féin leader, but never in a positive way.

Cutting the salaries of MLAs has an attractive ring – no work, no pay- but as we know, MLAs work or should be working in their constituencies, not just in the Stormont chamber. Besides, the financial saving made would come at considerable political cost.

If your salary were cut, what would you do? Start looking for another job. Politicians in many cases have families to support as well as themselves, so there is a good chance that politicians from all parties would begin to drift away from politics. Those who believe in devolved government know that we need to keep in place the Stormont structures, including the MLAs, and cutting MLA salaries would have a destructive effect.

Dear Nelson is right in one respect: Sinn Féin are different from the other Stormont parties: they have an all-Ireland brief. So were Stormont pay to be cut on a long-term basis, Sinn Féin people could be channeled into work in the south, where the party is intent on making further headway as an election begins to look likely there. The DUP and other parties at Stormont don’t have that kind of hinterland into which their politicians can move. Even Westminster, the only other playing field open to unionists, is bunged full already.

Most important of all, to paraphrase Theresa May: a bad Executive and Assembly would be worse than no Executive and Assembly at all. If Sinn Féin cannot go back into an Executive where there will be a degree of courtesy and trustworthiness, where people make commitments and live up to them, they would be better not to go back into an Executive at all. If it’s a matter of going back into the same old same old, Sinn Féin would be wise to reject such a useless offer – not least because their electorate have told them at the ballot box “No more same old same old”. Sinn Féin know what has energized their party supporters, and they’re not going to flout that,  just so dear Nelson will get his way.

37 Responses to On Nolan and dear Nelson