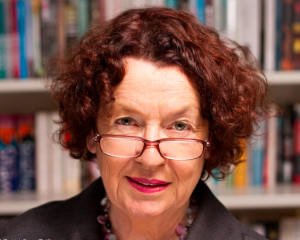 Writing in a Belfast newspaper last week, RD Edwards explains her reasons for voting for Brexit. After her curious explanation she goes on to say that she still agrees with herself.

“I finally voted ‘out’ because I thought staying shackled to an unreformed arrogant, expansionist, bullying and inept EU would be a worse option for the UK than relying on the courage and initiative of those who live in it to carve out an unindentured future.” Unindentured?Future?

She goes on: “The EU is secretive, keeps the world out, prevents members from making bi-lateral trade deals and tries to impose uniformity on their laws and governments…..I could not support staying in what I think has become a sprawling, sclerotic, dysfunctional, bureaucratic hell-hole incapable of meeting such urgent challenges as mass migration and Russian aggression, while demanding a European army that can only undermine NATO.”

To convince herself even further she reflects:

“…in November. I wrote in Prospect, a left-leaning London based magazine that as an Irish citizen and a British resident, I had voted for Brexit after much soul searching because I thought it in the interests of a majority of the people in these islands and indeed in Europe. But the fear and distress evident among many Irish people was getting to me, so I finished my article with:’ “Now watching the hurt and fear among my countrymen, (sic) I feel strongly that the British government owes it to its small neighbour to make every effort to minimise the collateral damage.

I’m pleased to find I agree with myself on all that.”

In spite of all the learned arguments showing how worse off we, in the Six Counties, will be out of Europe, she still thinks she did the right thing to vote to Leave the EU. She now wants Dublin to work closely with Westminster to minimise the damage!

Ruthie states: ‘The British government is genuinely trying to minimise the pain of Ireland, north and south.’ She now hopes that Dublin will work with the British to find solutions to problems that matter desperately on this island but few will care much about in Brussels’. I would say fewer still care about in London.

Ruthie does not care about the damage the Leave vote will do to the Irish economy or to the Good Friday Agreement and to the future relationships on this island. She could not care less about how Brexit will negatively affect citizens living in border areas in Ireland.

All of this is of no concern to Ruthie. She is standing by the right wing fascists like Farange and Co who contrived through advertising and media promotion to dragEngland out of Europe to protect their borders from foreigners.

According to Ruthie, ‘In the pursuit of power Gerry Adams is banking on a hard Brexit’. According to her twisted logic it will be in Gerry’s interest to have border customs posts along with British army military posts. You can only guess where she is going with this twisted logic.

It is good that she still agrees with herself. It would be dreadful now if she did not. There is a name for that condition.

31 Responses to ‘Ruthie Agrees with Herself’ by Joe McVeigh