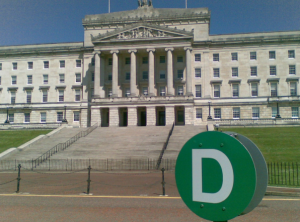 My withdrawal from having written in a while has been down to wanting  to see how things would play out and take stock of all the latest developments in the political arena. There are after all years when nothing happens and weeks when everything happens. I don’t therefore pretend to know everything that is occurring behind the scenes, but here’s an analysis of where I see things as they are, and where they are heading, in “our wee country”.

In London, you have a discredited “zombie” government, clinging to power via financial backhanders with the Orange “Aristocracy” of “Ulster”; having failed miserably to win an election predicted to wield a Tory blue landslide. Across the water in Dublin, you have a weak minority government also, where the bourgeois intrigues have colluded in scraping together a coalition in parliament of every vested economic interest in Free State life. Of course neither administration has the wherewithal to last a full parliamentary term – which is why the DUP deal with the Tories and Fianna Fail’s parliamentary does tricky stuff with Fine Gael in order to create a few mere rotten budgets.

This has culminated in an intolerable situation whereby in the aftermath of the RHI fiasco, power-sharing could not be allowed to continue. No self-respecting nationalist politician is going to go into that good night; where the people charged with enforcing the Agreements are either in bed with or indifferent to the antics of the Unionist political junta. We always knew that the British government was not impartial but to see them wining and dining Arlene Foster as a Queen-maker really removed any possible ambiguity.
But the truth of the matter is, we (nationalists) as a community, don’t need Stormont in order to exercise leverage over the affairs of this part of Ireland. No no, we have a large and vibrant diaspora which spans the world over – upon which, unlike the Empire, the sun really will never set. We have allies and sympathisers in both legislatures in America and in every parliament on the continent, particularly following the Brexit vote. Unionism has no such card to play before the eyes of the world. They are an outdated relic of a bygone era when almost a third of the planet’s land mass was governed (by force of arms) from Whitehall – of course there is still Empire Loyalism, but it has no political clout they can capitalise on.

I mention that because we as a people have never truly flexed the full muscle of the diaspora; we have never had a Dublin government prepared to upset the balance of relationships with Britain, by doing so – until Brexit. Brexit has taken a match to a massive political tinder-box. And now that Britain leaving the EU is estimated to severely hit the bank accounts of the commercial class that dominates Leinster House, and who Mr. Varadkar chiefly represents, even the most ardent advocates of the status quo are having a serious rethink of our sordid constitutional set-up. For years we must admit that people spoke passionately of the inevitability of Irish reunification without outlining a clear and robust plan to establish it, waiting for something to happen to kickstart that process. It was chants of “Up the Republic”, while on the electoral football field the “Germans” (Unionists) always won. So, it would be a cardinal sin against the Irish people if those identifying as republican didn’t seize the moment now, when a desire has become a necessity, taking that tide fully at the flood.

What I’m saying is that if these talks prove a lot of the “same old song and dance”, then it’s time to simply walk away indefinitely from these negotiations. It’s time to take our quarrel to the court-room of the world, where to loosely paraphrase Kipling, ‘we ask no more than the right, to reap what we have sown.’ And given that event, where both Stormont and the outgoing power-sharing experiment fully collapses for all to witness, it isn’t going to be the British government rubber-stamping what the DUP tell them should go on here. Indeed, the Americans and Europeans will be drawn in to pull the two sides apart, fearing a return to the past. Every EU equality regulation and directive is being incorporated into U.K. law regardless. And what the DUP have discovered recently, with the latest episode of abortion legislation, is that even when their own MPs are required to help form a British government, they have no foot over the throat of that very government or parliament to act within its own perceived interest – when it wants to. Their “friends” are, in reality, their ideological enemies.

As it stands, anyone with half a brain can tell there is going to be another general election and soon, my own guess is it will be within two years at most. And if that should result in a Labour government coming to power, then there will already be serious bad blood between them and the Unionists as a result of the present stitch up. However, if a Tory government is returned and with a working majority, then Mrs. Foster and her colleagues are going to discover an English-led government acting within an English self-interest. After all, it was the Tories who abolished Stormont in the 70s, legislating for both Sunningdale and the NICRA demands. It was Margaret Thatcher’s government which started the line of communication with the IRA. John Major initiated what became the peace process. Their agenda is thus not one and the same. A British government will act within the British national interest and not the wishes of the Orangemen.

After all is said and done here, the crescendo and crux of our circumstances must be that we use every card at our disposal to bury for good the preceding approach and notion of “power-sharing” – gone, finished and never coming back! The nationalist people voted in overwhelming numbers for no return to that repugnant reality, which has to be and must be respected. For we, and the tax-payer generally, know the price of RHI (and all the other scandals) financially, but the price of treason against Irish best interests runs much deeper – without any historical dividends.

14 Responses to The Stalemate: ‘Sayonara’ Stormont By Donal Lavery