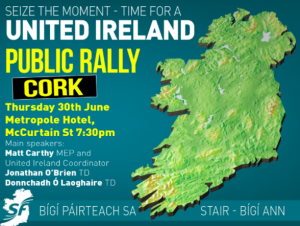 Sometimes you have to laugh at the things people come out with.  Fintan O’Toole in a recent Irish Times article cited yet again Churchill’s famous ‘dreary steeples of Fermanagh and Tyrone’. But of all the times I’ve seen that line repeated, I’ve never read anyone who pointed out that the dreariness of Fermanagh and Tyrone is not an innate quality, but the product of British intervention in Irish affairs. It’s as if the Irish were being boringly repetitive in going on about their need to be free from Britain. It’s an old and almost risible ruse: blame the victim.

Another line which is worn threadbare with use is “That’s a good idea but now is not the time.”  During the civil rights campaign, it was often cited:  we understand your frustration with injustice, but this is not the time to bring people out on the streets.”  I expect the African-Americans heard similar advice during their drive for equality in the 1960s. Another way of putting it is “We sympathise with your cause and that’s why we’re saying you shouldn’t be taking the approach you are.”

Brian Walker has an article on the Irish Times  website titled ‘Pushing the Irish unity agenda could backfire on the South’. You can read it for yourself but the title goes to the heart of it:  to agitate for Irish unity will stiffen the resolve of unionists and Britain not to give it. So you have two choices: shut up about a united Ireland and let the sleeping dog lie. Or give the sleeping dog a solid boot and be prepared to have your foot and leg mauled by an angry mastiff.

There will never be a time when discussion of or agitation for a reunited Ireland is welcomed.  The British government doesn’t want to be reminded of the recipe for disaster that the creation of partition has been; unionist politicians don’t want anyone to suggest that their wee country mightn’t after all be a country but rather a dreary misshapen creation whose raison d’etre – a permanent unionist majority – is melting like a 99 in 25 degrees weather.

No, sorry, Brian. Don’t mention the fault-line that runs through Anglo-Irish relations? That makes as much sense as Basil Fawlty’s desperate efforts not to mention the war.

50 Responses to You want a united Ireland? For God’s sake keep your voice down