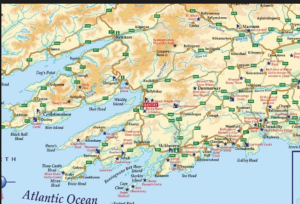 A recent visit to west Cork reminded me of the severity and brutality of the struggle in Munster during the war for independence/‘The Tan War’ (1918-21) when the Flying Columns led by Tom Barry took on the might of the British empire. When I visited the homestead of Michael Collins in Woodfield, a few miles west of the town of Clonakilty, I was reminded that British soldiers in the Essex regiment under Percival burned down Collins home-place on April 16th 1921 – just because….

Michael’s brother Johnny lived there. Some months previously he received this message from the Brits:

“You murderer, Take notice that in the event of anything happening to any of the crown forces, your life and property becomes forfeited. There is no guarantee that you are not going to suffer the penalty of death, you cannot expect otherwise as your brother has murdered, burned and robbed respectable and innocent people. So make your peace with God. God Save the King.”

In Cork city I was reminded of how two Lord Mayors died as a result of British brutality and obduracy. Mayor Tomas Mac Curtain was shot dead in his home by the RIC on 20 March1920. Terence MacSwiney succeeded him as Mayor and was arrested and taken to England for imprisonment without charge. He died in Brixton jail on 25 October 1920 after 74 days on hunger strike. There were many more murders and burnings carried out by the Crown forces –not just in Cork but throughout the whole island of Ireland. When I hear the likes of Harris and Edwards defending the British Empire’s cruel and inhuman activities in Ireland, I realise just how perverse and warped these commentators are and how evil are those big money people who allow them so much space in their gutter press. They refer to the IRA but they have got the whole thing out of perspective. They do not ever consider the context. They are politically motivated because they have no morality. Let us look at the context.

The British Empire extended across the world as a result of their policy of confiscation, mass murder and brutality. Over many centuries the British had conquered all the provinces of the small island of Ireland and by 1800 were able to enact the Act of Union giving them complete political and economic control of the island ofIreland. One result of that was the horrific genocide between 1845 and 1850 when millions of people were starved to death while food was being exported to England. There were sporadic and courageous attempts at resistance by the United Irishmen, the Young Irelanders and the Fenians. Another brave attempt was made in 1916 which met with the same cruel response from the Brits with the execution of the leaders and the imprisonment of many of those involved in the Rebellion. In the wake of the British barbaric response men and women organised in small groups to make the British feel uncomfortable in this their nearest colony. Sad to say, there were always locals who supported the Brits.

In the years following the execution of the 1916 leaders, that Empire faced a serious challenge from a highly motivated well organised group of revolutionaries in theprovince of Munster. For years afterwards, that revolt inspired many anti- imperialists around the world to rise up against the murdering imperialists. It was a people’s uprising and it was led by the legendary Tom Barry. The most infamous battalion of British soldiers were those known as the Black and Tans who wreaked havoc inCork city and county, burning and murdering all before them. These thugs were active in other parts of the country as well. They burned the village of Balbriggan to the ground in September 1920. Many of these were criminals in England enlisted for a few shillings a week to do as much damage as they could in Ireland and so put manners on the Irish.

The British auxiliaries and the Black and Tans suffered a severe defeat at Kilmichael, West Cork in November 1920 and in Crossbarry on 18 March 1921. That was the beginning of the end of the British Empire. We will never forget those great and courageous people like Tom Barry and Sean Hales and Tomás MacCurtain and Terence MacSwiney who said enough was enough.