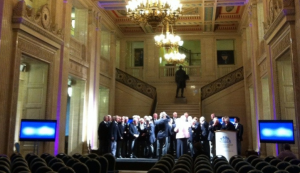 I’ve just listened to the DUP’s Simon Hamilton, in his commendably low-key speech pattern, making clear that the problem with getting the Stormont institutions active again is that Sinn Féin have announced red lines in advance of any negotations, while the DUP puts forward no such impediments. Everything is on the table, as it were.

The great thing about this line is it makes the DUP appear reasonable and open, Sinn Féin stubborn and unbending. Which of course is not the best way to go into negotiations. This is a variation on the one-lot’s-as-bad-as-the-other line of analysis; what we’re being offered is the it’s-all-the-Shinners-fault line. (Yes, Virginia, you have indeed heard that before).

Let’s time-travel briefly back to when Martin McGuinness brought the curtain down on the Stormont tragi-farce. He did so because there was a lack of respect from the DUP, there were commitments made in previous agreements which had been simply ignored, and  because the leader of the DUP insisted on remaining as First Minister, even while she and her party were being investigated regarding the appalling waste of public money that was the Renewable Heating Initiative.

So tell me: what has changed? Has the DUP apologized for referring to its opponents as reptiles? Has the DUP leader agreed to step aside temporarily  as First Minister (as would be the case anywhere but in our pongy North-East Nest)? Has there been an acceptance that if something is promised in a document you’ve signed up to, it should be implemented?

None of these things. Instead, in what has been declared a generous gesture, the DUP leader has suggested getting the Executive functioning again while the parties continue talking about matters generally.

When you think about it, that response is astonishing. We’re back in the 1950s, when unionism did what it wanted, put people in prison because they didn’t like their fáinnes, gerrymandered and discriminated, and those nationalists who objected were seen as at best suspect and at worst subversive.

Wakey-wakey, guys. There’s a huge decades-long chunk between that time and now. Nationalists and republicans have had it. If unionist politicians think that they can act in any way they like and then declare their opponents unreasonable because they object, then unionist politicians have been asleep at the wheel.

The big thing in politics is to be sure your base supports your actions. Captain Terence O’Neill discovered that, when he tried in his timid way to create Catholic unionism by visiting some convents. If Sinn Féin has any doubt that its present approach is risky, it simply has to remember what happened in the Assembly election: its electoral base and quite a few others besides are 100% behind their refusal to take this sort of fertilizer any longer.

Nationalism/republicanism in our NEN has never been stronger. And it will continue to strengthen and grow, if Sinn Féin doesn’t ask for respect but demands it.

View all posts by Jude Collins →
Martin Dillon and bias at the BBC
Did Catholics/Nationalist support the IRA?