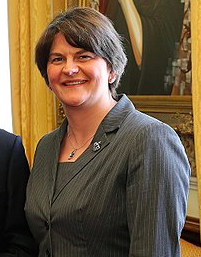 Watching David Davis in his exchanges with Michel Barnier, you wonder how the Tory negotiator can be so dim. He’s confronted with twenty-seven other countries but he still thinks that Britain should decide when trade talks will begin. Barnier and the EU have told him that other matters must first be resolved but Davis still seems to think that he can get the EU to do a U-turn and fall in with Britain’s wishes. Smart boy wanted.

Here, we’ve just witnessed something  similar. Sinn Féin have been making the promised Acht na Gaeilge/Irish Language Act the core indicator that the DUP plan to live up to their commitments and respect things they have hitherto dismissed as the cravings of a crocodile. If anything, slimming down Sinn Féin demands to this single matter of dispute is perilous enough for the party. Their supporters may say “What about a Bill of Rights? What about legacy issues? If the DUP don’t show they’ve changed their stance on these basic matters, they’re proving once again that the leopard doesn’t change its spots. ” (Yes, Virginia, the leopard is  a beautiful creature – certainly when set beside a crocodile.

And the DUP reaction? After weeks of sending dear Nelson McCausland, the failed politician, to every available  BBC microphone to tell the world that it’s all the Shinners’ fault, the DUP leader Arlene Foster has come out with a generous offer. She’s said that if Sinn Féin go back into the Executive, the DUP will “address culture and language issues”, and if there isn’t agreement, the Executive “would cease to exist.” In other words, she doesn’t give a commitment to a free-standing Irish Language Act but talks instead of general “culture and language issues”; and she says if they don’t agree on these in cross-party terms, the Executive will dissolve.

Come on, Arlene. You can do better than that. You’re expecting the Shinners to settle for discussion of “culture and language issues” with the reassurance that if both parties aren’t satisfied, there’ll be no Executive. How dumb do you think Sinn Féin are? Typically, the UUP has fallen in line behind the DUP and are offering a wispy echo of the DUP position. BBC Raidio Uladh/Radio Ulster had a leading UUP figure on – I think it was Doug Beattie – lamenting that Gerry Adams had been so swift to reject this generous offer. What’s more, he said a lot of Sinn Féin voters would think less kindly of their party for rejecting so rapidly something so helpful.

I wonder how he knows that. Because any republicans I speak to think that Sinn Féin have pared their demands down to a bare minimum. Does Arlene really think Sinn Féin are going to go back into the Executive on the basis of a half-promise of something wholly vague?

Sinn Féin have been called many names over the years, by unionist politicians and the media; but they rarely are called stupid. And even if they were, they would still be clever enough to spot a promise of nothing that is certain to bring all parties back to where they now are.

It’s called living up to your commitments. Sinn Féin committed to rejecting the absurdity of governing alongside a party that appears not to grasp the fact that when something is signed up to, it should be delivered on. Their electorate responded by turning out for them in massive numbers.

So enough already, Arlene. The republican community have had it with Stormont under the terms you propose. Wisely, Sinn Féin have represented their views by telling you in so many words to take a running jump at yourself.

View all posts by Jude Collins →
‘Ruthie Agrees with Herself’ by Joe McVeigh
Can Jeremy Corbyn prevent the Tories throwing Britain (and us) under the bus?