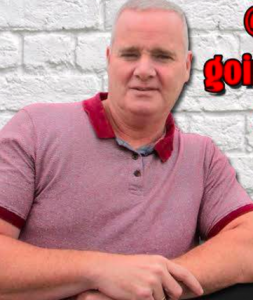 If you drive around the north of Ireland you’re sure to come across one of the signs: three words that test our notion of democracy. They are ‘FREE TONY TAYLOR’.

Tony Taylor is in prison because the former Secretary of State Theresa Villiers thinks it’s a good idea that he should be. “His early release from prison under the Good Friday Agreement has been revoked” is a more official way of putting it but it amounts to the same thing. Which is internment.

Decades ago, in the 1950s, internment was seen as part of the state’s machinery. We lived in a unionist-controlled state, so of course they were going to put in prison anybody they thought had a face that didn’t fit. People who were Irish language enthusiasts, people who were active members of the GAA, people who just happened to live in a strongly republican area. Into prison they went, and they came out only at Her Majesty’s pleasure.

Then we had internment in the 1970s, and the nationalist population had become sufficiently bold to see  that internment didn’t have to be as inevitable as the weather, that if the government could shove into jail anyone they selected with no questions asked, we were living in a …what? Police state? Corrupt state? Call it what you will but nationalists and republicans in the 1970s made their feelings about internment clear.

Tony Taylor is a member of the Republican Network for Unity. That means he doesn’t think much of the political line adopted by Sinn Féin. On Friday, after a visit to Maghaberry prison, the Mayor of Derry City and Strabane District Council Maolíosa McHugh has declared his support for the release of Tony Taylor. So too have Sinn Féin’s Raymond McCartney, Martina Anderson and Elisha McCallion.

That’s good. Although it’s a pity that eighteen months had to pass before protest at Taylor’s detention should assume a markedly higher profile.

Taylor’s case is one that tests our commitment to democracy. It’s safe to say his thinking would be different from, even contrary to that of most nationalists and republicans. But that’s exactly the point. If we only agitate for rights in the case of those who agree with us, we’re behaving in a way that says “I’m all for democracy but for my lot only – the others can look after themselves.”

There are a lot of people – not all unionists – who would say there’s no smoke without fire, Theresa Villiers must have had good security information to decide to intern Taylor. Except that’s not how justice works. You put people in jail when you’ve evidence that they’ve done wrong – evidence that stands up in court, is robust enough to withstand scrutiny. If Theresa Villiers or the justice system doesn’t have such evidence, then Tony Taylor, like the rest of us, is innocent until proved guilty.

Our shame should be that it took so long for his case to receive support at an official level.