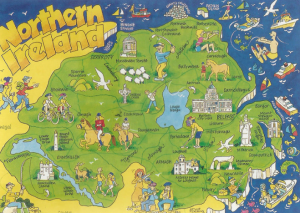 There are three major strands of thinking  on the future of our North-East Nest (NEN).

The first is that unionists must be persuaded of the good sense of a reunited Ireland. Brexit has opened up a main highway for this view, establishing as it does an overwhelming argument for not just a seamless, invisible, magic-tree border but getting rid of the damned thing altogether. According to this view, it is the duty of nationalists and republicans to follow Tone’s dictum and make room for the Orange in our new Ireland.

The second is that we need to live up to the Good Friday Agreement. It says that, however dim-witted a British Secretary of State may be, s/he has the power to call a border poll, s/he thinks a constitutional change is likely. So there would be a border poll in the north and a similar poll in the south. Only when a majority in both jurisdictions agreed to it could constitutional change occur and steps take to create a new Ireland. Since the British Secretary of State must blow the starting whistle, it’s likely that a substantial majority in the north will vote for a reunited Ireland.

The third body of opinion is that which believes that politics is about power. That is, people don’t act because they’ve done some thinking and have decided the present state of things is unsupportable; people act when the pressures against doing anything else are sufficiently strong. This was seen in the creation of the southern state. Unionists living their had no choice, if they stayed, other than to accept the new dispensation. We saw it also in the formation of the Executive led by Ian Paisley and Martin McGuinness. Ian Paisley moved from being the never-never-never-never man to accepting he must sit down and work with a former IRA leader. The unthinkable happened because the alternative was worse or non-existent.

Insufficient attention has been paid to the third of these attitudes. A great deal of what we do is forced on us: speed limits on our roads, the prospect of prosecution if we flout any law, the necessity of observing the courtesies with our neighbours, because if we start bad-mouthing about them, we may find ourselves in court.

This is where the Alliance Party got things totally wrong during the Troubles, and where some people are still getting it wrong thirty years later. There is no point in appealing solely to people’s better nature to do the right thing. It is indeed important that they do the right thing, but they need to know that there are rules and sanctions against doing the wrong thing.

View all posts by Jude Collins →
Did Catholics/Nationalist support the IRA?
Leo Varadkar and senseless killings