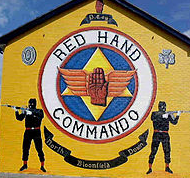 I wonder how the early Christians responded to the man who would become St Paul. Initially, of course, they probably responded by putting as much distance as possible between him and them. But then as he showed he was indeed converted from his ways of persecution, was he still eyed warily?

I ask because the unionist paramilitary group Red Hand Commando have asked that they be accepted as a community group. Social worker Jim Wilson (at least I think that’s what he is) has urged that this generous offer be accepted. Others, like Sinn Féin’s Gerry Kelly, have labeled the whole thing ludicrous.

There is a case to be made for converting the Red Hand Commando into a social worker group. There is no doubt a sense of camaraderie between its members, an ability to work together, a certain standing perhaps in the community to which they belong. So maybe this move into positive activity, away from lethal pursuits, should be welcomed, even as St Paul eventually was by the early Christians.

But there is one big difference: St Paul didn’t have any weapons. I’m open to correction on this, but I don’t remember unionist paramilitary groups – the UDA, the UFF, the Red Hand Commando – decommissioning their weapons. We all remember the famous decommissioning of IRA weapons; but my only memory of unionist decommissioning is a news clip of a man with a metal grinder sawing in half a few rather old-looking rifles. And certainly it is accepted as old news that the UDA, UFF, Red Hand Commando exist. They haven’t gone away, to borrow a phrase.

So it could be that I’m in a small minority which finds this Red Hand Commando proposal  not so much surprising as absurd. The IRA has decommissioned its weapons and no longer exists as a paramilitary force. Decades have gone by since the IRA decommissioned and dissolved, yet the UDA etc continue to exist and this is accepted by everyone, including the PSNI. We talk about a hierarchy of victims; nobody seems to talk about a hierarchy of paramilitaries. Is it that unionist paramilitaries are seen as ‘good’ paramilitaries? Or have I just eaten too much cheese last night and dreamt the whole thing?

Maybe you have an answer. Maybe Jim Wilson has an answer. I don’t. And until I hear a convincing one, the Red Hand Commando will have to come up with another Joke of the Month idea.